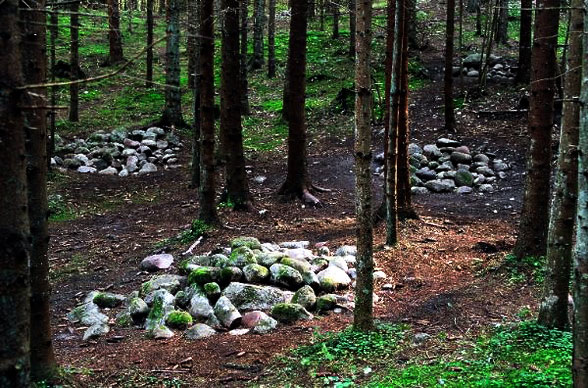 In each country, there are special places that people go to face the  "unknown". In Latvia, the place is Pokaini forest. The forest is located 80 km south-west of Riga, near the small town of Dobele.

The Pokaini forest was talked about already in the 30s, however the full discovery of the place in Latvia happened in the mid-90s. In the mid-70's, NASA satellites were systematically reporting powerful radiation emanating from the forest area. The conclusion was unequivocal: there must be a secret military facility in Pokaini. Rumors spread that the forest grew on the site of a fallen space object, or that this place was a  pagan sanctuary, others called it a “spot of death”.   Many spiritual healers consider the Pokaini forest to be an ancient holy site. But all versions on what that place is agree with the fact that this territory is not an ordinary place, it is a place of powerful concentration of energy.

There are rocks assembled around 30 hills in a particular sequence. People say that when you touch the stones, you feel a strange radiation. Moreover, they say that different stones give out different sensations. It is not recommended to take these stones out of the forest as a souvenir, since it's considered bad luck. They say that  some people feel uplifted after a walk in the forest, and some return from the forest with a severe headache, as if the forest treats each one differently – it heals some, and makes someone else's sickness progress faster.

Another strange fact is that there is not one sick tree in the Pokaini forest – apparently, it heals itself. Besides that, it never rains in the forest in the daytime – only at night.