Tana Toraja is the highlight of Sulawesi island in Indonesia. Luckily, the devastating raids of mass tourism bypassed this land and  their unique burial rites remained unchanged. For 25 generations the life of the Toraja tribes, who populate the island,  has been revolving around death.  Many years ago Toraja people came here by boats from the southwest - according to their legend, from the other side of the ocean. In their culture the death of a person is considered the main event in his life, so they prepare for it in advance. 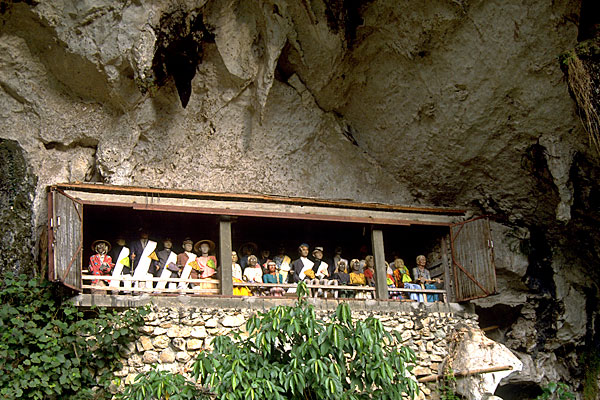 ​Torajans make Tau Tau – the full-size posthumous sculptures out of the breadfruit tree wood. These sculptures resemble the person that has passed away, and are very expensive, since they are true works of art of wood-carving. Nobody has a look of grief at the funeral ceremony, it is accompanied by singing and dancing. Buffaloes, chickens and pigs are slaughtered in unimaginable quantities, as a sacrifice to the main god Puang Matua, and as part of the feast for the funeral festivities, which last for a week and are held between July and September. If someone dies any other month, he is not considered dead yet – he will be preserved in formalin and stay in the house with their living relatives. The relatives talk to the embalmed bodies and give them food, since their soul still lingers in the place.

The funeral rites, Rambu Soloq, are very elaborate and expensive, the family has to pay the tombablu – the master of  the death affairs, get a sandalwood coffin, and prepare the animals for slaughter. Some families save money for years, while the deceased stays with the family. When the money is collected, the ceremony can begin. The body of the dead relative is placed into a built tower – a lakkian – in front of an open arena, where the rites take place. The more powerful the person who died was, the more buffaloes and other animals are slaughtered at the feast. Buffaloes are needed for the deceased to arrive at Puya, the afterlife, and the more buffaloes are slaughtered, the faster the arrival will be. The climax of the feast is the slaughter with the machete, while everyone dances and sings, and young boys catch the squirting blood in the long bamboo tubes. Some ceremonies are so large that over 100 buffaloes are killed. Sometimes, when a buffalo has been sacrificed and its head is separated from the body, the body is made to get up and walk for up to ten minutes. 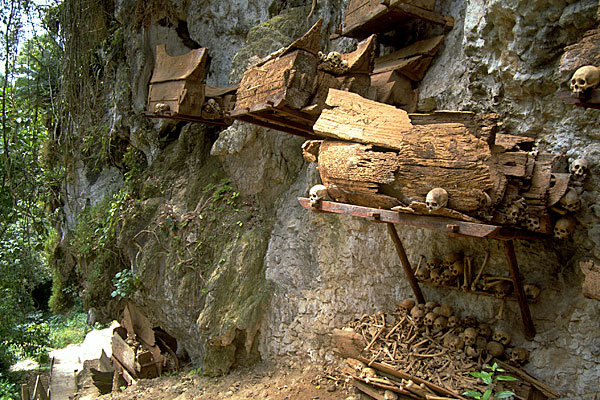 As the ceremony reaches its climax, the villagers watch the cock fights, which is another important part of the ceremony – the cock fight is considered sacred, because it involves the spilling of blood on the ground.  The traditions requires to sacrifice at least 25 pairs of chickens.  In the end of the ceremony the coffin is carried to the family cave, which is carved in the rock high above the ground, and the Tau Tau effigy takes its place among the other deceased relatives – that's when a person is officially considered dead. The coffins are installed into the cliffside or onto a tree. Over time, the coffin wood rots, the coffin falls down, and the disturbed remains of the deceased are transferred into crypts. 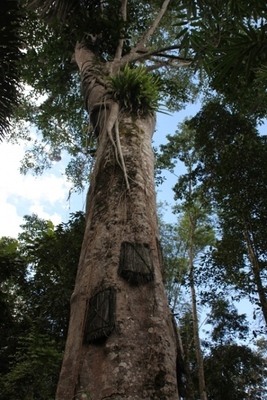 Once in every 5-10 years, Torajans have a special ceremony of Cleaning Corpses – people open the coffins, change the clothes of the corpses and repair the damaged wood and scattered bones. They also change the clothes worn by Tau Tau.

Although most Torajans consider themselves Christian, they also believe in a variety of local gods and that  all souls of the dead go directly to paradise.

The rock with many effigies on it resembles an apartment building with its residents standing on the  balcony looking at the street – this is quite a unique site. The figures of children sit in the lap of adults, dressed in real clothes. It seems that were the spectators to disperse, the figures would come to life and start talking and gossiping.

The village of Rantepao is where you can see these incredible ceremonies and greet both the dead and the living. The most popular burial site is in the village of Londa – this is where the wealthy Torajans are buried, and their effigies bear the closest resemblance to their prototypes.

Gallery: Rites of the dead of Tana Toraja