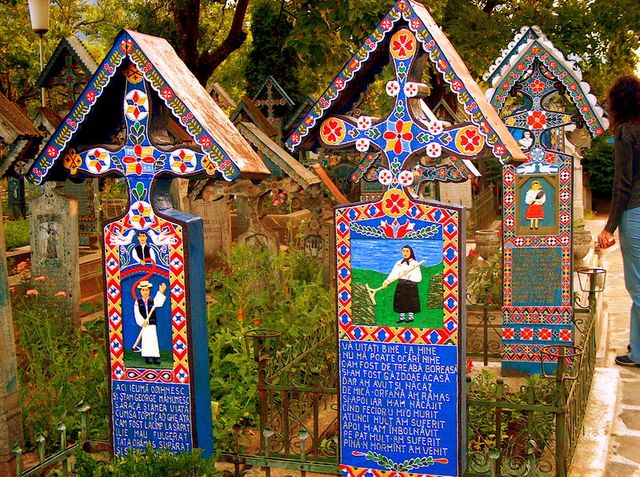 Cimitirul Vesel - the Merry Cemetery in the Romanian village Săpânţa is a unique example of  tombstone art. Its wooden tombstones and reliefs depict not only the typical picture of the deceased, but also report on the causes of his death in a graphic form, for example - hit by a truck, run over by a train, crippled by a disease. Most crosses feature short, and sometimes quite frivolous poetic messages addressed to the departed. Locals do not shy away from talking publicly about dirty details and various addictions of the deceased.

The first multi-colored wooden tombstones appeared in Săpânţa in 1930, when a local sculptor and painter, Stan Ioan Pătraş, started decorating crosses with ornaments and depict scenes from the life of the deceased, accompanied with ironic comments. His first works had predominantly dark blue shades, but later, every other color was used to symbolize certain things - green represented life, yellow - fertility, red - passion, black - death. Now the cemetery has about 800 crosses of various forms, carved and painted single-handedly by Stan Ioan Pătraş.

Embodied in the wooden figures and epigraphs, these memories don't idealize the ones who passed away – they are quite realistic and full of life. The humorous rhymes and funny pictures are much more heart-warming than the classic labels, like "Rest in peace". While the multicolored ornament is similar for most of the crosses and monuments, the text and bas-reliefs on each tomb depict diverse situations of provincial life: loggers with axes in their hands, school teachers with books, cyclists, grandmas standing at the stoves, and even children playing football.

Stan Ioan Pătraş passed away in 1977, and is buried in the same cemetery, with a short poem on his tombstone.