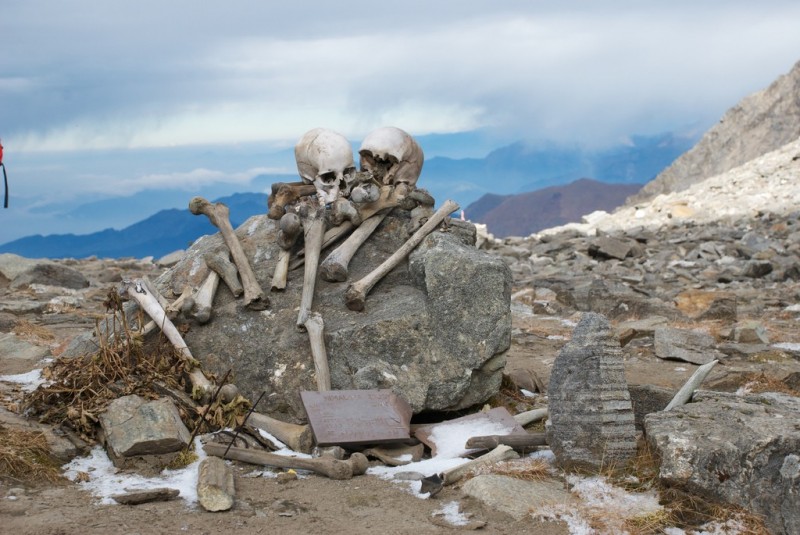 Roopkund is a glacial lake, situated at the altitude of about 5029 m in the Indian state of Uttarakhand. When the ice melts, hundreds of human skeletons can be seen under the water surface or floating on the water. The lake was found in 1942  by a forester of the local nature reserve.

They say that some of the bones are here from the XIX century. Initially it was assumed that the remains belong to the Japanese soldiers who entered the area, and then died as a result of  the local "inhospitality". Since the discovery of the lake happened during the Second World War, the British immediately sent a detachment to see if they could find some secret passages of the enemy. However, after investigation, it became clear that the skeletons could not have belonged to the Japanese soldiers.

Some researchers and scholars have suggested that the bones belong to General Zorawar Singh Kashmir and his people who got  lost and died in the Himalayas on the way back after the Tibetan battle in 1841. However, the analysis of radioactive carbon, conducted in the 1960s, refuted this theory.

The analyses showed that the skeletons could belong to the XII - XV century period. This led historians to believe that the remains were somehow associated with Mohammed Tughlaka's unsuccessful attack of Himalayas. Yet the other scholars believe that the bones belong to unknown victims  who died from an epidemic. Some anthropologists argue that they could have been victims of a ritual suicide.

It was only in 2004, when a team of European and Indian scientists arrived in the area by the initiative of the National Geographic, when the terrible truth of the mystery began to unravel.

DNA research suggested dividing the dead into two categories: some bodies were short, others - much taller. Moreover, the bodies belonged to a much earlier period  than what was previously assumed. It turned out that the bones have been lying here from about 850 AD.

The cracks on the backs of their skulls show that they died from the deadly blow to the head, but not because of a landslide or an avalanche. The blows to the head were made with blunt round objects about the size of a cricket ball. The absence of any other wounds on body shows that the impact was applied from the top.

The only plausible explanation for the fact that so many people got similar injuries is that something fell on them from the sky, like heavy hail, for example.

There is no historical evidence that there were trade routes in the area, however Roopkund lake is one of the points along an important pilgrimage route of Nanda Devi worship, and festivals were held there about once every 12 years. The  500-600 dead people found in the lake were,most likely, pilgrims. Approaching the lake, they probably went down the slope to collect fresh water when clouds gathered above their heads. Obviously there was no shelter in Himalayas, so many, and perhaps all of them died of hail. The icy waters of the lake preserved their bodies for hundreds of years. Some skeletons still have hair and nails, as well as pieces of clothing on them.

Perhaps some of from the pilgrims escaped his fate, returned to the village and told them what happened, because there is an interesting legend circulating in the nearby villages – there is a folk song of the Himalayan women, which tells about a goddess who got very angry at the people who invaded her mountain abode and sent down upon them a deadly rain in the shape of stones hard as iron.

Gallery: Roopkund - the lake of skeletons

Read more about India off the beaten path