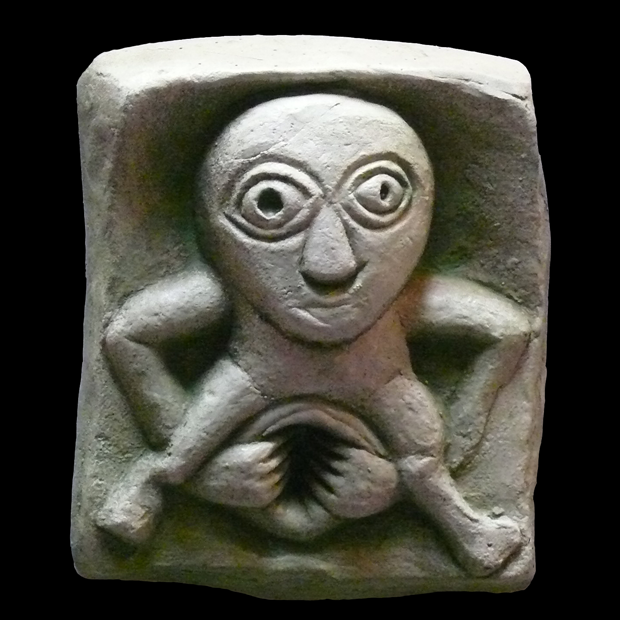 You can find Síle na Gig (pronounced Sheela nah Ghee) in many places in Ireland and throughout the British Isles in churches or castles.  Síle na Gig  are stone carvings of women, usually old and ugly, with exposed genitals. There is still no exact explanation what they symbolize, although plenty of theories have been put forward about their origin.

Many who see those stone carvings get slightly shocked at first. Although it is interesting to hear various stories about what  Síle na Gig means, the weirdness of the image with really large and detailed genitals often distract the listeners. Moreover, even historians refer to  Síle na Gig (Sheela na Gig) as “a vulgar hag”, “disgusting genitals”, “nasty hag”, etc.

Some theories suggest that Síle na Gig depict the consequences of lust or that they were meant to scare off evil spirits. The most popular theory is that Síle na Gig is an old pagan goddess. Another theory is that they represent birth and fertility. Even today, some women believe that if they find a Síle na Gig  and stroke it, they will help them conceive a child. Some think that because the depicted women look old and unattractive, they symbolize the end of fertility or even death.  Others explain the oversized genitals as a symbol of the Cosmic cycle, the gates through which one enters the world and exits it through the body of our foremother Earth.

Many Western feminists and lesbians know  Síle na Gig and honor her like Christians revere the Virgin Mary.  After all,  Síle na Gig symbolizes not only the cycle of life, but brings your attention to the main female body parts in the process, without sublimation of the feminine role, as opposed to Virgin Mary. In rural Ireland, some fortunetellers practice exposing genitals to cure curses and against evil eye.

What disturbs the historians the most is that the figure of  Síle na Gig (Sheela na gig) is rather grotesque. Sile doesn't look like a glamorous maiden with nice shapes – quite often, she has a bold head, scars on the face, an evil or insane grin, sticking-out ribs, and sometimes she has more than two breasts, or more than one nipple on one breast. It is, indeed, quite puzzling that those carvings would decorate the walls by the church entrances, or serve as keyhole adornment. However, many churches were built on sites of the older, pagan churches to absorb the places of pagan worship. Another theory associates the entrance to the church with entering the womb of the goddess – the cradle of death and rebirth, where we are taken apart and then assembled again in a renewed state.

Sometimes there is a stork and a birch tree next to the Síle carving – this hints to the fact that a stork is believed to bring children, and birch tree is a Scandinavian symbol of regeneration and purification.  Bercana rune was considered a protective rune, which embodied the power of creation of anything new. Little Irish babies used to lay in cradles, carved out of birch tree wood, which protected them from evil eye, women would wear Bercana amulet to protect them from being raped, spiritualist use birch tree objects to ease the passage from the material world into the world of spirits.

Regardless of what the meaning of  Síle na Gig (Sheela na Gig) is, they continue to bring us joy by shamelessly exposing their genitals from the walls of some churches and castles. Many of those are no longer in their original locations – some priests were too horrified to have those images on their churches. Some Shiles were broken or destroyed, and some were sent to the museums. The most popular places where you can find them in the wild are Bunratty castle, the Rock of Cashel, the Cashel Palace Hotel, Fethard in the Tipperary county, Ballinderry castle and Taghmon Church.

Read more about Ireland off the beaten path