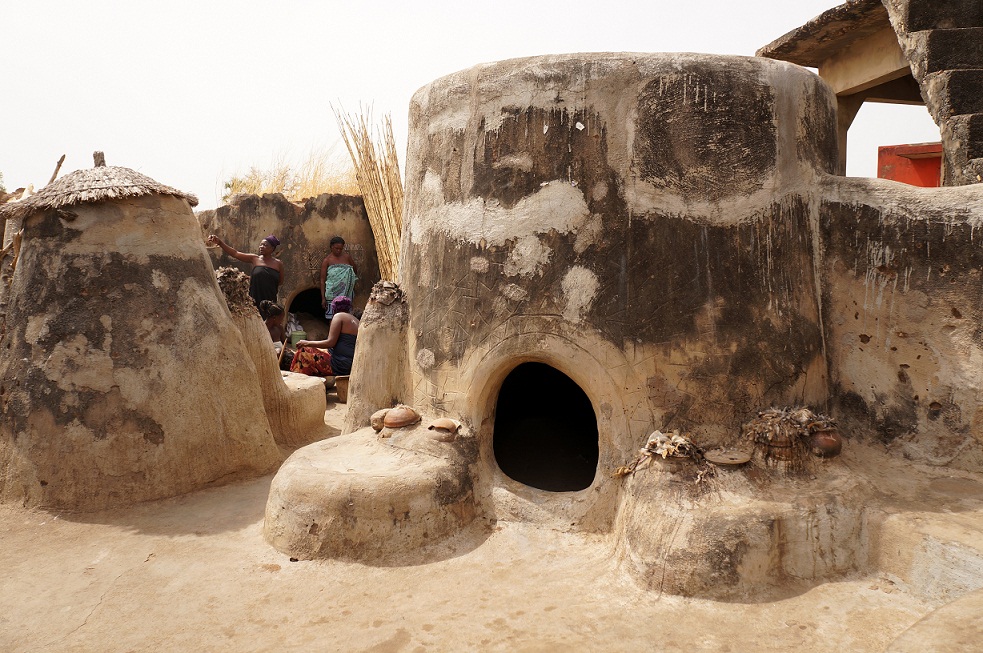 Tallensi people of Northern Ghana continue fascinating anthropologists and archaeologists because of their rich culture and interesting ritual sites.

Tallensi are divided into two groups – the Talis, who believe that they sprouted from the earth itself, and the Namoos, who supposedly arrived to the area about 400 years ago. Tallensi religion has Earth cults and fertility symbolism, totemic observances and various shrines. The shrines, located next to Tallensi dwellings, are made of pillars, which surround personal items associated with the deceased ancestor  - like knives or bracelets, and sacrificial remains like skulls or bones. There are many fetishes spread around in Tongo hills.

Tallensi shrines have two types of architecture – they are round with flat mud roofs or with hay roofs, which are looked down upon. It is believed that Golib god hates fire, and doesn't approve of hay roofs. The fact that Tallensi closely follow Golib's taboos helped preserve this unique cultural landscape and tradition. The dwellings of Tallensi are also circular, with small doors and a couple of holes in the walls for the smoke to come out.

The shrine in Tengzug village is one of the most important places of worship in the region. Tengzug is surrounded by fields of sorghum, baobabs and sacred rocks, and has many traditional animist priests living there. The sacredness of the place attracts many pilgrims, who have to be topless in order to observe and participate in the ritual sacrifice of birds. Tengzug shrine is famous throughout West Africa for its high success rate in fulfilling the dreams of their visitors. Of course, for your wish to be fulfilled, you need to sacrifice an animal.

There are other village shrines, dedicated to domesticated animals and decorated with animal skulls and other remains to represent the hard work those animals have done for their masters. There are donkey skulls, chicken feathers and blood and headless goats with leaves up their bums.  Each animal symbolizes certain values for the community – dogs represent security, rams – harmony, chickens – agreement, donkeys – burden relief.

During the Golob festival, which happens in March-April, a ban is placed on blood shedding, and all the rituals performed in the shrines are bloodless. The festival during which the most sacrifices are made happens in October-November and is called Bo’araam.