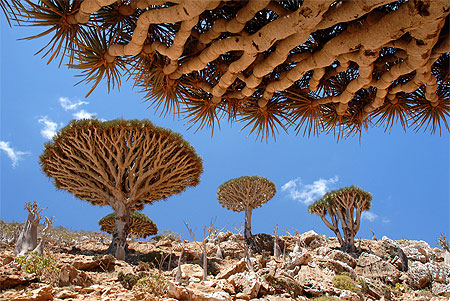 Socotra island is one of the most alien-looking places on Earth because of its unique flora and fauna, which survived in the harsh desert conditions. More than a third of the 800 or so species on the island are found nowhere else on earth, because of the island's isolation.

Socotra belongs toYemen, and is located in the north-western Indian Ocean, 250 kilometers off the coast of Africa, and about 350 km south of the Arabian Peninsula. The island is 134 km long and 43 km wide. Due to the strict travel regulations in Yemen and a high threat of terrorist attacks, many travellers are deterred from visiting the place.

The word "Socotra" means “Island of Happiness” in Sanskrit. Whoever gets a chance to visit this place would agree because of the stunning diversity of botanical charm combined with the silence of isolation and white sand beaches.

The island became isolated about 6 million years ago, when a part of the continental plate separated from Africa. Once the island had lost the influence of the external world, the local nature developed in its special way, acquiring unique features.

The landscape of Socotra looks like a perfect location to film a sci-fi movie about an alien planet - the east and center of the island are dominated by mountain ranges with sharp peaks towering into the sky up to a height of 1570 meters, the mountain valleys resemble magical green oases of life, the steep slopes overhanging the plain coast or the raging waters of the ocean , windy limestone plateaus – this is the surreal scenery of Socotra. 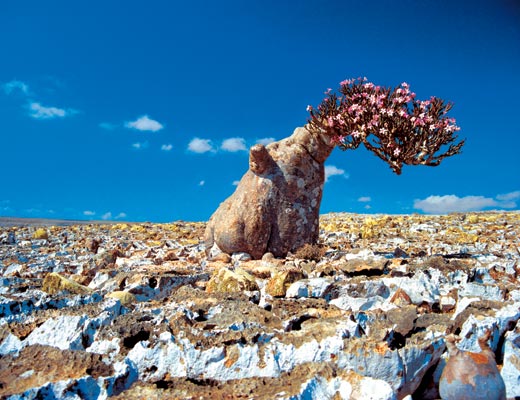 Scientists say that the unique plants of the island are leftovers from the ancient terrestrial flora, which has been extinct on the mainland for millions of years. Some Socotran plants are 20 million years old. The most famous specimens are the Dragon tree, Cucumber tree, giant Dorstenia Gigas and Adenium Sokotranum, which resembles an elephant foot, adorned with delicate pink shoots. Ancient legends say that in the Dragon Trees have blood of dragons as their sap, and therefore possess magical healing properties. Needless to say, Dragon's Blood was one of the widely used ingredients in Medieval magic. The sap is, indeed, blood-red, and it is actively used in cosmetics and medicine. The original form of its stem and umbrella-shaped canopy the Dragon Tree even more unique – the branches in its crown extend to the sky, which gives them the appearance of gigantic desert mushrooms.

The Cucumber tree is the only tree-like member of the pumpkin plant family, Cucurbitaceae. It has a thick, fleshy stem of a baobab, up to 1m in diameter, and small branches forming its crown. Due to the use of this tree for commercial purposes, its population is dramatically decreasing.  The tree got its name because it bears cucumber-like spiked fruits.

Adenium Sokotranum is one of the most beautiful “flowers” of the desert, with its big trunk, consisting of fleshy parts fused together, making it about 2.4 meters thick. Some of these trees grow upwards and some grow in breadth, looking like flattened barrels. The short branches of the tree form a crown decorated with pink flowers. This tree can grow even on bare rocks.

All terrestrial mollusks that live here, together with 90% of reptiles are also endemic. You can find about 140 species of birds on the island, including Socotra starling, sunbird, bunting, sparrow and golden-winged grosbeak. The only mammal native to Socotra is the bat.

Since the ancient times, Romans, Egyptians, and Greeks used the natural wonders of the island of Socotra, such as aromatic resins, incense, healing aloe and dragon's blood. Many adventurers came to these lands for the rich booty, despite the creepy legends about the Guardians of the island - the giant snakes, that live in its caves.  Alexander the Great, Queen of Sheba, and Marco Polo – all dreamed about aquiring the Socotran riches.

As for the modern inhabitants of Socotra - they are very self-sufficient and cheerful people, in spite of the rather complicated living conditions. They speak old semitic protohistoric Soqotri language, which is a great interest to linguists. Since they don't have a concept of a safe and comfortable life, the inhabitants of the island have developed a deep respect and understanding of the sea and the land, which was important for the survival of the nation.

Read more about Yemen off the beaten path

Find more off the beaten path near: Shibam