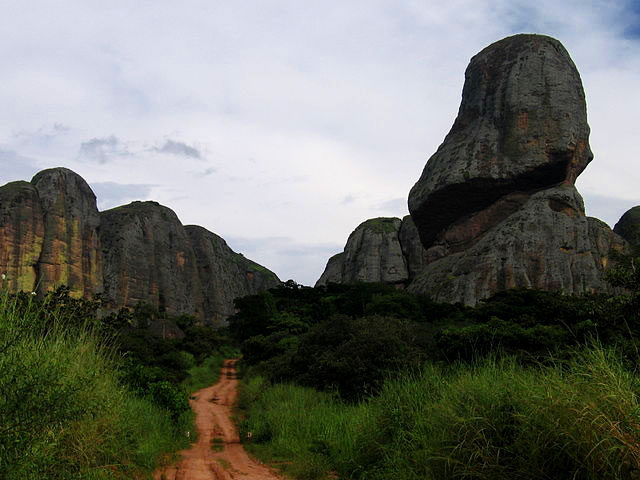 The Black Rocks of Pungo Andongo, a.k.a. Malanje Black Stones are a large number of huge rocks of various shapes, towering over the savannah like a pack of some cyclopean animals. The rocks are  located near the small town Pungo Andongo, which is 116km. from the regional center - the city of Malanje. Geologically, the Black Rocks are the oldest frozen lava emissions. However no one really knows how this giant monoliths came to be here.

African tribes, who live around the black rocks, have many beliefs and legends associated with them. The tourists usually like to go to the Male Stone -  Pedra Homem, which has a pronounced form of a huge phallus. According to a legend, if a man touches the base of Pedra Homem, his genitals will start growing regardless of his age. . And, of course, there is a Female stone - Pedra Mulher, close to the Male Stone. However, it is unclear how this one works on women. There are other rocks as well, resembling giant animals standing in the middle of savannah.

One of the rocks has carvings of footprints. Legend has it that those were left by the  Queen Zinga Mbandi Ngola  - a legendary  and a highly respected personality in Angola. She lived in the XVII century and was famous for a fairly successful struggle against the Portuguese colonialists by bringing tribes together  and establishing a strong African state in the center of Angola – Matambú.

There are also ruins of an old Portuguese port, built in 1671, next to the Black Rocks. It functioned until the middle of the XIX century and then was abandoned.