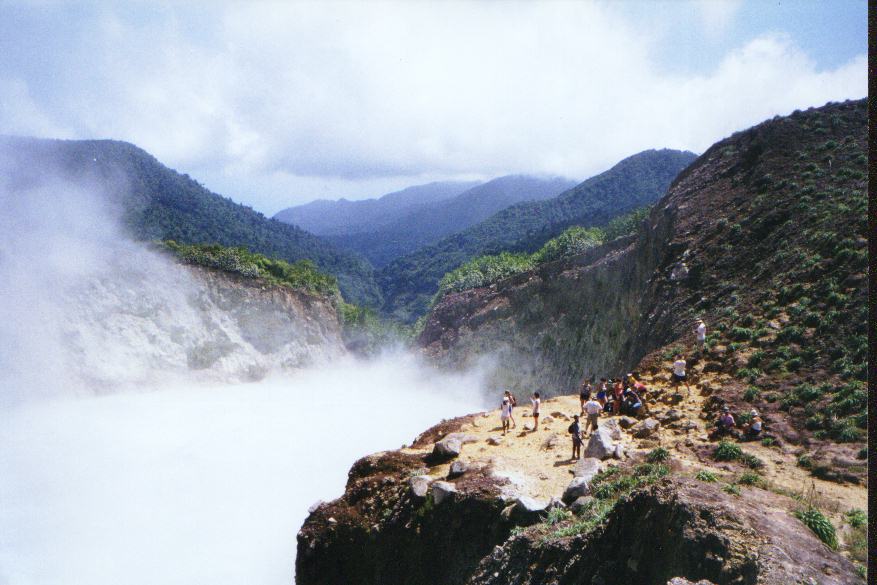 One of the most unique and dangerous lakes in the world is the Boiling Lake on the Caribbean island of Dominica.

Located in a volcanic zone, this lake is a steaming chasm with a waterfall in the heart of the National Park Morne Trois Pitons. Surrounded by tropical greenery and mountains, the lake is filled with bubbling bluish-gray liquid and emanates steam because of the high temperature of the water and the emission of sulfurous gases. In the vicinity of the lake there is the Valley of Despair, which is also filled with hot springs emitting sulfurous smell.

Whoever came up with the name of this place, didn't have to think hard – the Boiling Lake lives up to its name. It was discovered by two Englishmen in 1870. Five years later, the temperature of the water was measured for the first time - it ranged from 82 to 91.5 degrees Celsius. This alone is enough to cause serious burns, but this is just the temperature at the edges of the lake. In the center of it the temperature is much higher, so much so that it can not be measured without being boiled to death. During the rain season the temperature of the water drops 10 degrees, but there are still underground currents and sometimes even lava on the bottom of the lake, so taking a dip in this lake is out of the question.

The trail to this fascinating attraction is not an easy one, but at the same time, it is one of the most interesting mountain routes of the country. Usually it takes a whole day to hike to this unique body of water,  so it is better to start your journey in the morning, and with a guide – to make it safer. Besides that, you can enjoy taking a sulfur bath on the way to the lake, which will definitely raise your spirits and restore your physical strength.

Gallery: The Boiling Lake in Dominica

Read more about Dominica off the beaten path

Find more off the beaten path near: Delices