Cargo cults are a unique phenomenon, which developed on the islands of Melanesia and Papua New Guinea in the 20th century, when Europeans began to bring there goods from the Western civilization. Ships and aircraft, which were bringin in cargo for the American and British military bases in the Pacific, caused a lot of astonishment among local tribes. They could not explain how white people, by seemingly doing nothing, manage to attract loads of stuff from nowhere. The cult of John Frum, one of the few cargo cults that still exist, has a few thousand followers on the island of Tanna in Vanuatu.

This cult was born in the 1930s, when someone called John Frum appeared in a village near Sulphur Bay and urged residents not to follow the Westernization promoted by the missionaries, and to return to their traditions. In return for this, he promised to return on 15th of February, with the lots of wealth and goodies for all residents of the island. According to one version, the name of John Frum came from the English “John from America”. Another version says that “Frum” or “Brum” came from the English “broom”, as a symbol designed to sweep the missionaries off from Tana.

The tribes' belief in John Frum strengthened during the Second World War, when the New Hebrides, at that time called Vanuatu, became an American base. The Americans lived in tents, marched back and forth, and talked on the radio. In exchange for clearing off a part of Vanuatu's forest, big American planes brought them food, clothing, and Coca-Cola. When the war ended and  Americans withdrew from the island, the locals started imitating them by raising flags and marching with bamboo rifles. They even built their base with a wooden airplane, ready to receive cargo from John Frum any moment. John Frum turned out to be a mischievous fellow, and never brought any goodies for the tribes. Nonetheless, every 15th of February, villagers of Sulphur Bay arrange a military parade with wooden guns, hoping that John Frum will finally return. 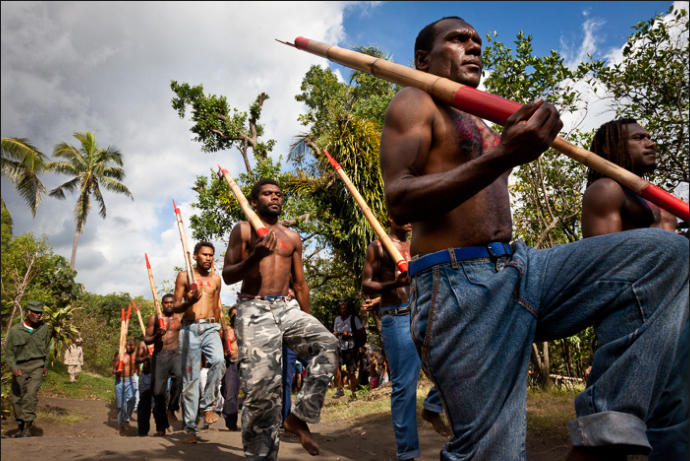 As any major religion, the John Frum cult went through its dark times. In the nineties, a new prophet, Fred, appeared in the village, who told the tribes that he received a message from the God - John Frum, while working on a fishing boat in the Indian Ocean. Fred announced that John Frum and Jesus - are one and the same. He ordered the tribesmen to throw away flags and guns and follow him to a nearby mountain, where he will hold a ceremony of enlightenment and deliverance from sin. Part of John Frum followers decided to go to the mountain with the prophet Fred, while the rest left the village left in disbelief and founded a new village 500 meters away from the old one. A year later, the military arrived from the capital, ordered the followers of the false prophet to evacuate the mountain, cleared the area and put the false prophet Fred and some of his apostles in jail.  The disappointed followers of Fred returned to the village. Some of them wanted to re-join the John Frum cult, but they were refused. Because of this Sulphur Bay has three villages: the original John Frum village, the village of renegades who followed the false prophet Fred, and the village of mixed followings. None of the villages communicate, because they feel offended by each other.

Gallery: The cargo cult of John Frum and false prophet Fred in Vanuatu

Read more about Vanuatu off the beaten path

Find more off the beaten path near: Tanna Island