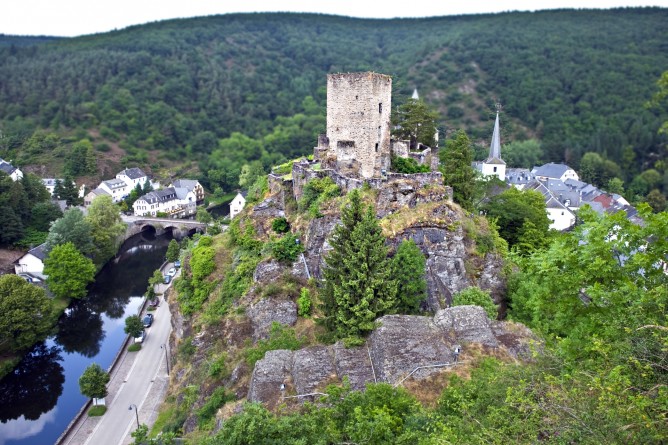 The castle of Esch-sur-Sûre is located in the valley of the Sauer river and is surrounded by the Ardennes mountains, and because of its location the name of the town literally means Esch in the pit. The ruins of the castle provide a fairy tale atmosphere for the area. It is best to visit the place on the last Saturday of June, during the Night of Legends.

The first written mention of Esch-sur-Sûre was in 773-774 AD, during the reign of Charlemagne. In 929, the first owner of the castle on the rock built 8x8 meter tall fortifications and some lookout towers to protect it from the Hungarians. The subsequent owners have expanded the castle and the territory around it. By the end of the 11th century, 19 villages were part of Esch-sur-Sûre territory.

The castle changed owners several times throughout the centuries. In 1902, the castle was sold to the Egyptian Martin Riamo from Hulzt, who did not take care of the castle and did not engage in any restorations of it. Therefore, in 1912, the castle was confiscated by the state in order to restore it. No one lived in the castle since then.

Until 1850, the area of the castle was very isolated. During the industrial revolution in 1850-1851, the  construction of 50 meter access tunnel gave more life to Esch-sur-Sûre. The city became a center of the leather industry in the country, a weaving factory was built together with enterprises for production of gloves, hats and candles.

Nowadays, a statue of Virgin Mary, the patroness of the town, stands on the rock with the castle ruins. The site is now protected as a historic treasure and illuminated at night, providing a magical atmosphere for the place.

And, of course, what is a castle without any legend attached to it . One of the legends tells that every night on July 14th , the ghost of the castle, King Henry, restores the appearance of the castle by going up a long ladder leaned against the statue of the Virgin Mary. Every year in June, the town celebrates a night of legends, where the locals tell many entertaining stories about the place.

Gallery: The castle of Esch-sur-Sûre

Kites of the dead in Guatemala