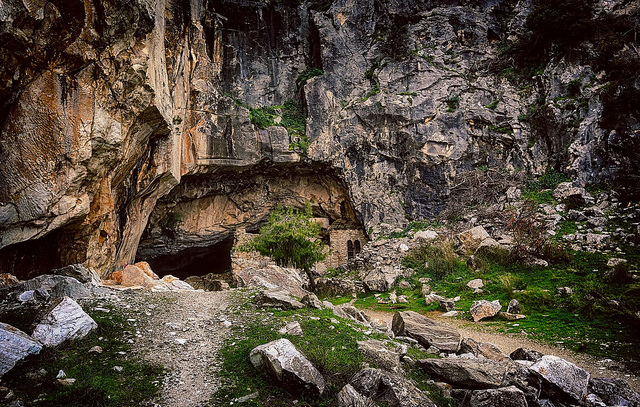 The Davelis Cave, not far from Athens, in Greece, is one of the most mysterious places, surrounded by superstition. The sinister reputation of the cave, which used to serve as a hideout for thieves, hermits, monks and a shrine of the Greek goat-footed god Pan, has increased rather than faded over the centuries.

Surrounded by so much superstition, the Davelis Cave makes modern people think twice before visiting it. The cave is also known as the Cave of Pendeli or Penteli Cave in Greece due to its location on the south-western slope of the Pendeli Mountain. The mountain is famous for the marble used to build the Acropolis in Athens. At the entrance of the stand atypically adjoined Byzantine churches, carved directly into the rock, dating back to the 11th century A.D. One chapel is dedicated to Saint Spyridon and the other one to Saint Nicolas. Inside the cave there is a network of tunnels, one of which leads to a small pond where archeologists found some evidence of a shrine to Pan, god of the wild, music, nymphs and shepherds in Ancient Greece. Many artifacts excavated from the Pendeli Cave depict Pan surrounded by nymphs. Now most of them are available in museums.

Local stories tell that the Davelis Cave has been the place of ghost phenomena. They say that vague forms of human-like figures and sheep-like creatures can be seen from time to time near the cave. However, it has been impossible to capture these odd shapes and figures as cameras would mysteriously stop working…

There are also many legends about Davelis, a famous robber, who used the cave as one of his numerous hideouts around Attica in the 19th century. Davelis is thought to be a Greek Robin Hood. His love affair with the Duchess of Plakentia resulted in construction of new tunnels leading from the cave straight to Duchess’ Palace and to the nearby Pentelikon Monastery. To reach the Davelis Cave you will need to organize the transportation yourself. There is no public means of transport to get straight to the top of Penteli village. Trekking is the best option. Don’t forget to take a torch and a jacket with you – the marble cave is quite cold. On the walls of the cave one can notice the etchings of past travelers. The floors, polished by time, can be quite slippery, so be careful and don’t let the spirit of Pan lure you deeper and deeper into the tunnels.