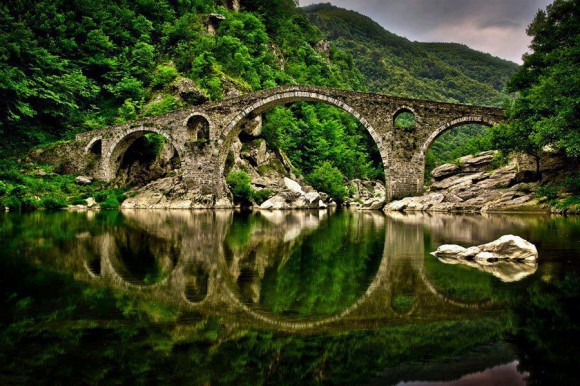 Despite the fact that the Devil's Bridge was built in the beginning of the XVI century, it is rooted in  the distant past. 7 000 years ago there was a Roman bridge in the same place, which was part of an important Roman "Via Ignacia" road, linking the White Sea (Aegean) and Thrace through the Makaza Pass. By decree of the Turkish Sultan Selim I the bridge was rebuilt in the Middle Ages. At that time he was known as "Sheytan kyupriya" -"the Devil's Bridge” in Turkish. The reconstruction of the bridge was assigned to the Bulgarian master Usta Dimitr from the neighboring village Nedelina. He incorporated a new design into the remains of a Roman bridge, using only stones. What is surprising is that so far, the bridge has not been repaired even once, simply because it is flawless and hasn't deteriorated at all. The most amazing thing is that the central arch of the bridge has an engraved hexagon, which scholars now call "the Seal of Solomon."

In 1984, the bridge was declared a medieval architectural masterpiece and a monument of culture and was put under the protection of the law.

Like any project, which has a name related to the forces of Evil,  Devil's Bridge is shrouded in legends associated with its origin and creation. Some believe that one of its stones has an imprint of the Devil's foot, and the place itself brings misery and death upon those who dare to approach it. Others believe that once Satan saved a Bulgarian girl who tried to escape the Turkish horsemen. She was about to commit suicide by jumping off the bridge, but when she was on top of the bridge, the Turks suddenly turned back and fled, because they saw Satan's silhouette in the water under the bridge.

The most common legend has it that the master decided to entrap the shadow of the girl who brought him food within the stones of the bridge, thus cursing the girl and making the bridge last forever. According to Bulgarian folklore if the shadow is entrapped, the person begins to fade away and soon leaves the world of the living.

At the heart of the construction of the bridge there is another popular legend. It says that the local residents spent years trying to build a bridge between the two sides, but every time the turbulent waters of the river Arda destroyed what they built. When they gave up on the idea, one young master decided to sacrifice the life of his beloved by entrapping her shadow in the bridge. Upon hearing this, Satan appeared and revealed the secret of the construction to the master on one condition:  the design must resemble the face of Satan, which should be both visible and invisible, which can be touched, but at the same time, the face can not  materialize. The bridge had to be built within 40 days, otherwise the Devil would take the young master's and his girlfriend's souls.

The master managed to fulfill all the conditions of the Devil, however he died soon afterwards and his mystery remained unsolved.

The fact is that the Devil's Bridge stands for 500 years, flawless and indestructible, and the satanic image is there for everyone to see. You can see the Seal of Solomon in the middle part of the bridge, which is 12 meters tall. The bridge forms three arches, each with four openings to mark the water level. At first it was not easy to find the image of the Devil, but then a Bulgarian journalist solved this mystery -  it is a rock right under the central arch, which is visible only between 11:00 and 12:00 in the day, when the sun's position makes a perfectly symmetrical reflection of the rock in the water (if you rotate the image of the bridge counter clock wise, you can see it).

Near the bridge there is also an ancient Thracian temple for holding burial vessels – it is 3000 years old.

Gallery: The Devil's bridge in Ardino