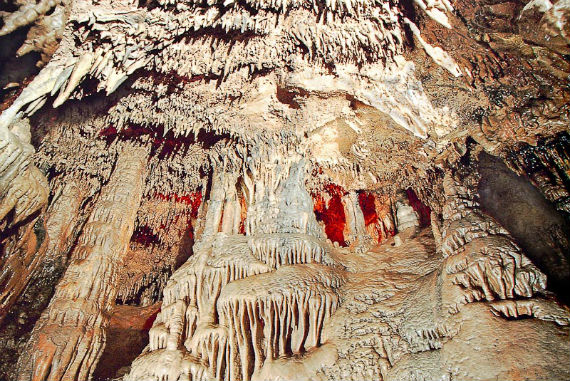 Kashkulakskaya cave is located in the north of the Khakassia republic in Eastern Siberia, and is recognized as one of the scariest places on the planet. Locals call it the cave of Black Devil or the White Shaman cave.

This place was inhabited by the ancient Khakas people, whose origin is disputed. Khakas people are believed to be either of Kirghiz or Mongolian descent. Some of the entities pagan tribes of Khakassia believed in were the symbol of procreation and the black devil. Khakas ancestors practiced human and animal sacrifice to appease evil spirits. Bones, ancient altar and fireplace, found in the cave along with the phallus-shaped stalactites serve as the evidence of their beliefs. According to the local legend, the cave absorbed the dark energy of the ancient shamans, which can occasionally harm curious visitors.

In the 1960s, a group of 20 students decided to explore this god forsaken place, and only 2 female students managed to survive this exploration. According to the local stories, the first student who survived went completely insane, behaved like a rabid animal and was immediately taken to a psychiatric ward. The second student was found by the policemen from the nearby settlement, her hair turned grey, holding a strange stone figurine, and refusing to let go off it. She was also hospitalized, and died in a month from some mysterious disease.

Since then, rumors started spreading about the cursed place, but despite that, the cave was visited by several expeditions. Some of them didn't have any incidents and the locals started getting frustrated due to the lack of mystery.

However, yet another mysterious incident got reported to bring the mystery back – students that went on a school field trip claimed to have felt inexplicable terror while being in the cave.  Supposedly, everyone who was in the cave, had strange hallucinations featuring a terrible monster with a body of a bear and a bloody skull on the head, or giant ravens on a pile of bones, or a scary-looking shaman wearing a fox hat with horns, performing magical passes. Parents of one of the boys from the field trip, claimed that the child became possessed with an evil spirit, got depressed and distant, and started writing disturbing messages in his notebook. Soon, the child passed away, leaving a note that said “die, but remember the stones”.

In 1980s the inexplicable phenomena of Kashkulakskaya cave interested scientists from the Novosibirsk Institute of Clinical and Experimental Medicine. Several participants of the expedition reported feeling strange and hallucinating inside the cave. Scientists suggested that these hallucinations, irrational behavior and panic in the cave could be a result of some kind of external influence - for example, an infrasound at a frequency of about 6 Hz can cause a feeling of indescribable horror.

To research the phenomena of the cave a special lab was set up right in one of the grottoes of the Black Devil's cave. The researchers carried out various measurements, experimented and found out that the cave had a geomagnetic anomaly - the electromagnetic field in the cave was constantly fluctuating. They recorded various pulses, frequent and infrequent, with the same amplitude, coming out of the bowels of the cave. Sometimes, the signal would be gone for 2 or 3 days, but then it would return. It has been established that these impulses come from the depths of the cave, and the scientists were curious to test if these impulses made people go temporarily insane. After several experiments, they concluded that these low-frequency impulses were, indeed, the culprit. The next task was to find out what generates those impulses. The scientists explored the entire cave, but weren't able to come to any conclusion – the only other explanation could be that whatever generates the infrasounds was even deeper, underneath the cave. This, in turn, caught the attention of the hollow earth and subterranean civilization enthusiasts.

As to the hallucinations, the scientists suggested that they might have been caused by the chemicals present in the air inside the cave, however this hasn't been put to test yet. More expeditions were needed, but with the coming of Perestroika in USSR the cave was forgotten, and the mystery of the Black Devil or White Shaman remains unresolved to this day.

Gallery: The evil cave of the White Shaman

Read more about Russia off the beaten path