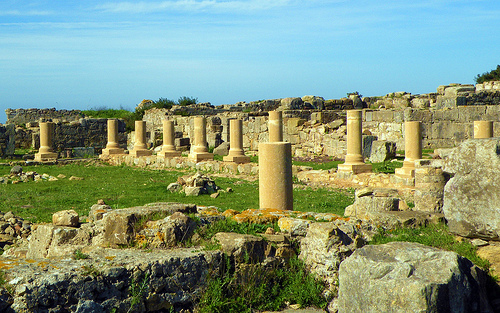 The ancient Greek stories tell that far to the west, on the banks of the river Oceanus, there was a magic garden. The garden was tended by three nymphs of the Evening – Hesperides, the daugters of Nyx or Hesperus. Hesperides guarded the magic golden apples that give eternal youth to anyone who eats them. The  apple tree was Gaia's gift for Hera and Zeus' wedding. Besides the Hesperides, a never-sleeping, hundred-headed dragon Ladon was guarding the tree. It was the golden apple from this garden, which caused the Trojan wars. This was also the place where Atlas stood, supporting the vault of heaven.

According to Plinius, the Garden of Hesperides was located in Lixus, a Phoenician city, the ruins of which can be found in modern-day Morocco.  Lixus is one of the few well preserved ancient ruins of the times of Carthage, dating back to 1100 B.C. During the Roman rule, Lixus became the main supplier of garum – a salty paste made out of anchovies' intestines and put into specific jars. The recipe for this paste still remains unknown.

There are no more Hesperides in the gardens of Lixus, no magic apples of eternal life, and the dragon is believed to be turned into the river. The only notion of eternity is the name of the city – Lixus means “eternal”. The ruins, however, are quite fascinating – you can see a small amphitheatre with a view of Loukkos river, the baths with mosaics, the town's acropolis, a primitive christian basilica from the period of decline for Lixus, impressive garum factories with pools for production of the paste, and other constructions.

Gallery: The garden of Hesperides in Lixus

Read more about Morocco off the beaten path