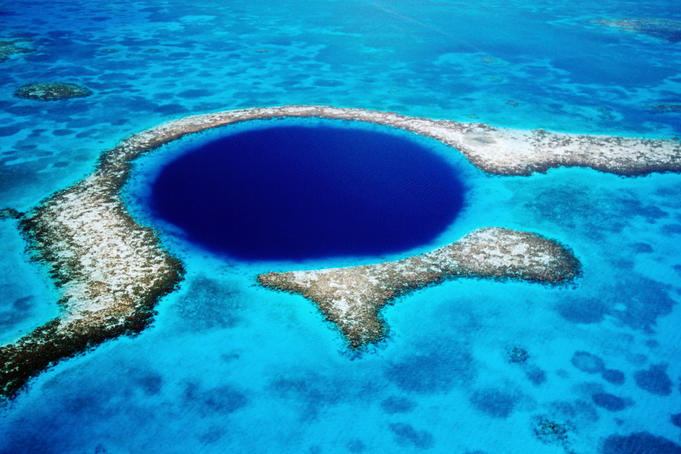 The Great Blue Hole is a large underwater sinkhole, located 100 km off the coast of Belize, in the center of Lighthouse Reef, near the Yucatan Peninsula. It is 305 meters in diameter and the 120 meters deep.

Jacques-Yves Cousteau, the undersea explorer, made the site famous in 1972 by going down this vertical cave.  Immediately after this, several theories about the origin of this unique place were put forth.  Initially, this geological formation was a system of limestone caves back in the ice age. According to scientists, one of the underwater caves' ceiling collapsed due to the gradual rise in the sea level and formed a funnel with stalactites and stalagmites below the surface of water.

On the other hand, such a precise round shape of the funnel and its large size make some scientists doubt that the ceiling collapsed for the reason mentioned above. Another hypothesis suggests that it might have happened due to a massive collision with a foreign body – possibly a meteorite, or, according to the ufologists, with an alien space ship.

While the experts in the field engage in heated arguments, others just enjoy this amazing place. The Great Blue Hole is a famous landmark and one of the top ten areas for professional diving. Not only you can admire the underwater world in the depths of the Hole, you can also meet some rare marine life there, such as the giant grouper and Caribbean reef sharks.

Read more about Belize off the beaten path