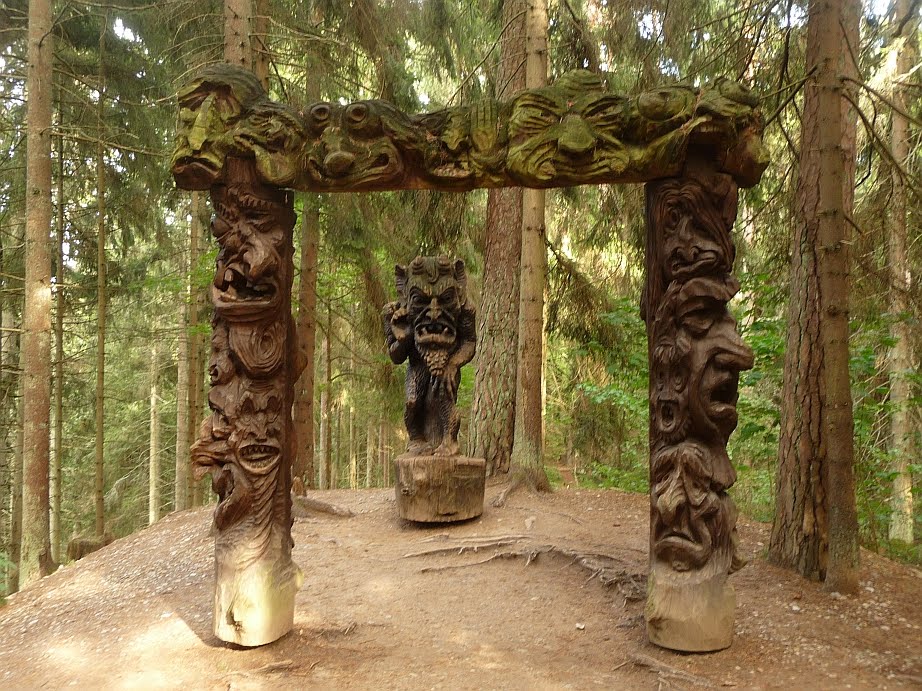 The Hill of Witches, Raganu Kalnas, is a 42 meter tall parabolic dune near Juodkrantė. It was considered a sacred place for Curonian and Sambian tribes, which populated the area in the ancient times.  After the arrival of the Crusaders in 1255 the worship of their gods became forbidden, but this place remained sacred to the followers of the pagan cults. The Holy Inquisition did not have much power in the lands under Prussian influence, so the hill was the meeting point of witches from all over Europe,  where they could practice pagan rituals and black magic without any real threat. The hill was situated on a small island, and accessing it was not easy – the shallow waters around the island made it impossible for sailing, so no one could really monitor if there was any “ungodly” activity going on in the place.

In the 19th - early 20th century, the inhabitants of Lithuania Minor would gather on the hill to celebrate Rasos or Jonines (the Dew holiday). The musicians and singers from Tilsit, Rusnė, Klaipeda would come in by boats via the Curonian lagoon, the people would rejoice, tell tales, dance until the sunset, jump over bonfires, search for the magic fern that blossoms at midnight, roll barrels with burning tar down the mountain, and wash their faces with a morning dew.

The celebrations on the mountain stopped with the arrival of World War I. In 1979, the wood carving masters of Lithuania decided to populate the hill with sculptures of the mythical creatures, demons and witches in memory of all the blasphemous acts that were happening on the Hill of Witches. By now there are about 80 sculptures along the trail – the guardian goddess Neringa, which created the Curonian Spit, people turned into ravens, Lucifer, the Gates of Hell, snakes, dragons and more. Nowadays, the Dew holiday is being celebrated on the hill once again – every 24th of June, people gather here to celebrate the festival, although now it is called Saint Jonas' holiday due to the influence of Christianity. However, the amazing sculptures in the place create a truly pagan atmosphere and provides an unforgettable experience for the visitors.

Gallery: The Hill of Witches in Juodkrantė

Read more about Lithuania off the beaten path