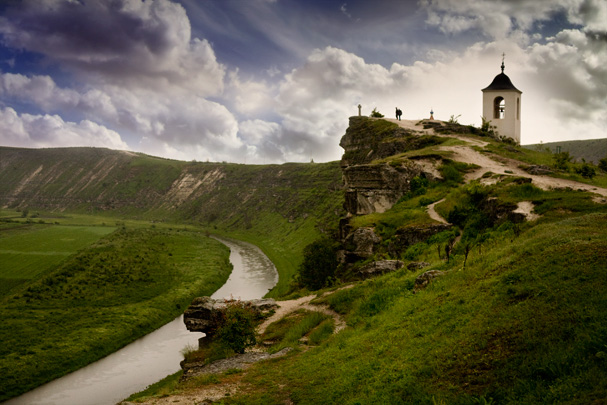 The territory of present-day Moldova used to be the crossroads for belligerent nations of Europe - Romans and Greeks, Scythians and Sarmatians, Dacians and Getae, Poles and Lithuanians, Tatars and Turks, Hungarians and Germans.

But whatever rule Moldovian territories were under through the ages, its inhabitants managed to preserve their Orthodox faith and traditions. Numerous monasteries on the territory of the country remind the visitors of those old days.

One of the most famous places is the largest cave monastery of the Eastern Europe, located near the village of Tipova, Orhei  district. The monastery was founded in the VI century AD, but then was abandoned for a long time and restored only in 1756. As with other historical places, many legends are associated with this place.

The  most popular legend is that this monastery was the place where Stephen the Great, the most prominent ruler of Moldova, secretly married his fourth Mary Voichita,  and that her ghost can be seen lurking around the premises.  Some believe that the ghost is actually his first wife, Marushka, who was born near the monastery.

Other legends tell that this monastery is the entrance to Hades, where Orpheus went to retrieve his wife Eurydice, and after his failed attempt decided to stay and live there, admiring the majestic nature of Moldova, with its waterfalls and smooth flowing rivers. According to the legend, this is where he died and that his tomb is located near one of the waterfalls.

The monastery is located right in the cliff on the bank of  the river Nistru, where monks carved their cells into the rocks. Some of the monks' cells got preserved to these days. The cells, utility rooms and places for prayer were linked by numerous passages and ladders. The inaccessibility of the monks dwelling helped save lives of the hermits and locals who sought refuge in the monasteries during hard times.

The first written mention about the monastery, which used to be called Horodişte, was in the 9th century. However, the heyday of the place was in 1776, when the church area, the cells and other rooms were expanded. During the WWII, the monastery was badly damaged, and closed down immediately after the war.  The last hermit, who lived in one of the cells, left the monastery in 1947.  With time, the place deteriorated even further, but in 1974 the remains of the monastery were taken under protection by the state, and the religious activities were resumed in 1994.

To reach the monastery, you have to go up steep paths and climb a lot of carved steps, while enjoying the magnificent Moldovian landscape from above. The cracks in the stone walls on the way to the place are filled with little prayers written on papers,  placed  there by the pilgrims. The cave monastery consists of three complexes – the temple with the Holy Cross (9th-15th centuries), the St.Nicholas temple (14th-15th centuries) and the complex with 18 separate rooms (16th-18th centuries). Nowadays, the upper area of the place has living premises of the monks, and the lower part with the caves is open for visitors.

Besides the beauty of the monastery, visitors are attracted by the amazing landscapes around the place. The combination of rivers and forests, cliffs, waterfalls and hills creates a unique Moldovan charm, together with its local culture and mild climate.

Read more about Republic Of Moldova off the beaten path