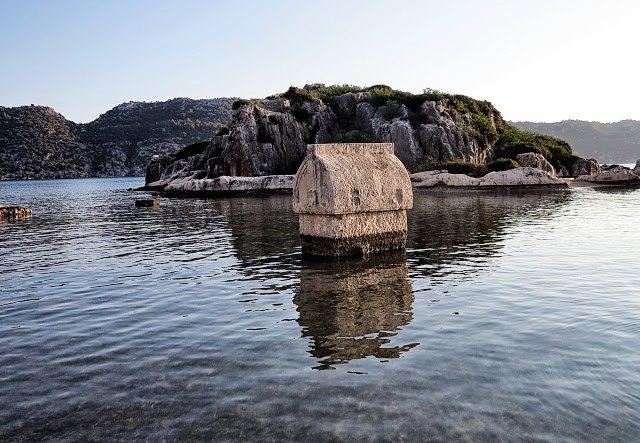 The ancient Lycian necropolis is all that is left from the ancient Teimiussa, located at the eastern end of the harbour of today's village Üçagiz (which means Three Mouths). Teimiussa,  like other ancient settlements in Antalya region, used to be a part of the Lycian monarchy. According to Herodotus, Lycians originated from Crete and were the followers of king Sarpedon – son of Zeus and Laodamia. They were expelled by Minos and settled in the modern day Antalya lands. Lycians had their own language and a unique alphabet.

Not much is known about the history of Teimiussa, and there is no known coinage from its time.  The Mediterranean civilization collapsed around 1200 BC and there was nothing but the legends to fill in the gaps of Lycian history until Herodotus, who mentioned Lycians extensively.  There are various theories about how the monarchy developed during  pre-Hellenistic period.  In 43 AD, Lycia was annexed to the Roman Empire.

The ruins of Teimiussa settlement are interspersed with Lycian sarcophagi from the Roman period, and some remains from the Byzantine times. The tombs with Lycian inscriptions are dated to be from the 4th century BC. Teimiussa was connected with Myra and Cyaneae,  the ancient Greek towns – some of the inscriptions on the tombs say that they belong to citizens of those towns. The oldest ruins are the stone cut tombs that look like upside-down boats, and the marble ruins of the Lycian sunken city. One of the tombs has a carving of a nude young man with the inscription that it belongs to someone called Kluwanimiye.

Üçagiz used to be just a tiny Mediterranean fishing village, and now it is visited more and more. There are some good restaurants and simple lodging places for the ones who go there on a day trip.