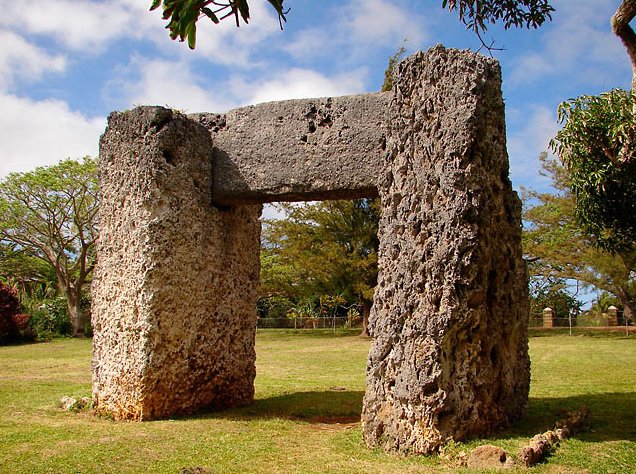 There is a legend in Polynesia, which says that if one passes through the Ha'amonga 'a Maui Trilithon, one will get to the kingdom of an ancient local god, and then come back safe and sound.

Ha'amonga 'a Maui Trilithon , also known as the Tonga gate, is located on the island of Tongatapu, where James Cook landed in the XVIII century. This island has made it a pleasant impression on the captain because of its lush vegetation, and he christened it the "Garden of greenery."

The mysterious Trilithon structure was found hiding in the thickets of foliage, and the first question of the historians was about its origins. The Trilithon is a burial place, which is lined with 4 meter blocks cut from the coral, which cannot be found on the island. It is still unknown who and how delivered these massive coral blocks to the island. In general, all the structures of Tongatapu get a great deal of attention from ufologists, who claim that these are works of an alien civilization.

Tonga gate is a striking example of this. The gate is standing in a completely desolate place among the palm trees. Two huge, 5 meters tall, limestone pillars support a massive crossbar, 6 meters in length. The total weight of this construction is 40 ton.

It is not easy to imagine how it was possible to construct a gate of such proportions two hundred years before the modern era, and who was it constructed for. There are different hypotheses as to what the gate served as – the most popular one is that it used to be the entrance to the territory of the king, however there are no other structures around it, just a single plate standing vertically. Legend has it that it is the throne of  the god of the sons of Tuitatui, or that it was built by the demigod Maui.

Researchers determined that the gate pillars were smoothly polished. There are some carvings on the pillars, which correspond to the days of the year - the longest and shortest. Therefore, the gate could have served as an ancient observatory.

Ha'amonga 'a Maui Trilithon belongs to the number of similarly strange gates scattered around the world: Stonehenge, the wooden gate in Japan, the stone gate near Okinawa – none of them lead anywhere, but they must mean something. This mystery has not been unveiled so far.

Read more about Tonga off the beaten path