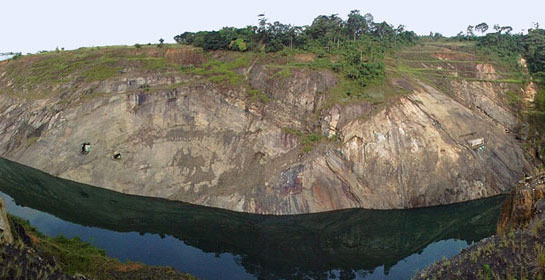 If you think that nuclear power is the invention of mankind, which is against all laws of nature, you are gravely mistaken. 1.9 billion years ago the area with uranium deposits in Oklo, Gabon used to be a natural nuclear reactor.  Discovered residues of actinides' decay  indicate that the reactor operated at a slow pace over hundreds of thousands of years. Scientists identified six zones of the reactor with signs of nuclear reaction.

In May - June 1972, during the routine series of measurements of the natural uranium parameters, the workers of Pierrelatte enrichment facility found out that Oklo's uranium had less than the standard percentage of the isotope U - 235.

While the standard percentage of this isotope holds for all uranium minerals, all rocks and the natural waters of the Earth, as well as in lunar samples, Oklo deposit  is the only recorded case in nature, where this consistency was broken. The difference in percentage was small - only 0.003%, but nevertheless, it has attracted the attention of engineers. Furst, they had a suspicion that there has been some kind of diversion or theft of fissile material, U - 235. However, it was found that  this variation in the content of U-235 could be traced to the source of the uranium deposits, when they took samples straight from the location.

This evidence was similar to the “fading” of U-235 in nuclear power plants, and at first this assumption sounded as a joke, since there was no man-made nuclear plant in the area.  Later, calculations proved that if the fraction of groundwater mass in the deposit is about 6% and if natural uranium is enriched to 3% of U-235, a natural nuclear reactor can be created.

Since Oklo's deposits are located in the tropics and are quite close to the surface, the existence of a sufficient amount of groundwater was very likely. The ratio of the isotopes of uranium in Oklo was not ordinary. U-235 and U-238 are radioactive isotopes with different half-lives. U-235 has a half-life of 700 million years, and U-238 decays with a half life of 4.5 billion years. Isotope U-235 is found in nature, undergoing a slow change. For example, if 400 million years ago this natural uranium would have had 1% of U-235, and 1.9 billion years ago it would increase to 3%, this would be the crucial amount for the self-sustaining nuclear activity of the reactor. This led the scientists to believe that Oklo reactor was active 1.9 billion years ago, working at a slow, self-regulating pace, which prevented boiling of the underground water and stopping the reactor activity.

So, how was it possible for the mother nature to create conditions for a nuclear chain reaction? First, a rich in uranium ore sandstone layer, resting on a solid bed of basalt, was formed in the delta of the ancient river.  After another earthquake, which was common during those days, the basalt foundation of the reactor-to-be sank a few kilometers into the depth, together with uranium deposits. The uranium vein cracked, and groundwater seeped through the cracks. Then the next cataclysm made the entire unit rise back up to the level it currently is. Groundwater served as the coolant for the reactor. Uranium ore formed clay "lenses", where the concentration of natural uranium increased from the usual 0.5%  to 40%.  It is still unclear how these compact lumps of uranium formed - perhaps they created  by the filtration of water that carried away the clay and molded the uranium into a single mass. Once the mass and thickness of the layers with enriched uranium reached the critical size, they created a chain reaction, and the unit started to work. As a result, the reactor produced about 6 tons of fission products and 2.5 tons of plutonium.

Oklo reactor worked for 600 thousand years and has produced approximately 13 million kW/ hour of energy. Its average power was about 25 kW - 200 times less than the world's first nuclear power plant, which provided electricity to the city of Obninsk near Moscow in 1954.  The energy of Oklo's natural reactor was not generated in vain - some hypotheses say that it is the decay of Oklo's radioactive elements which supplied Earth with the energy for heating up.

Read more about Gabon off the beaten path