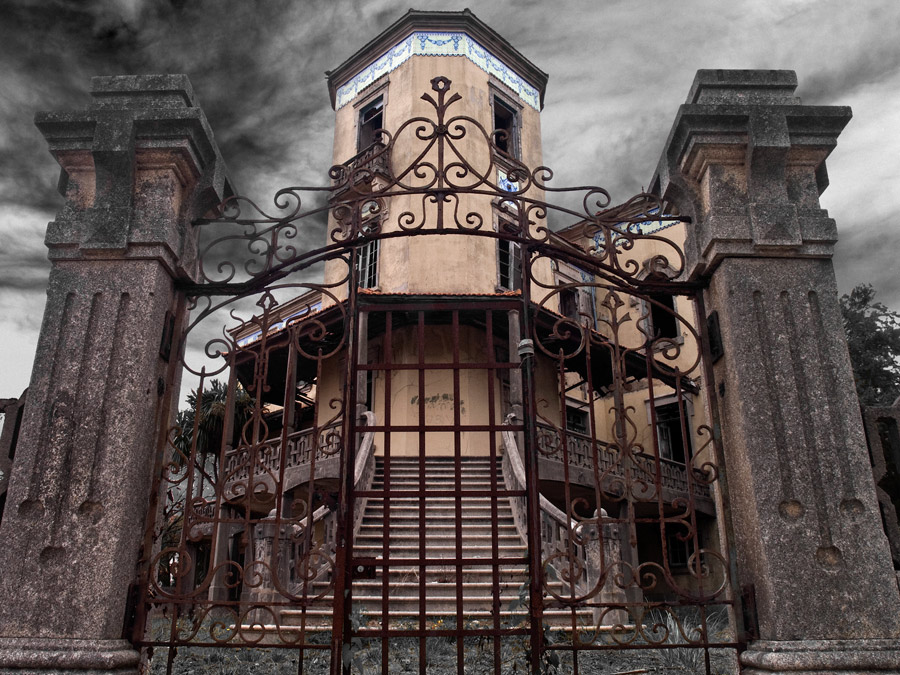 This is a strange abandoned place, located in Coina, Portugal, known by three names: Palace of Witches, Hell's Tower or the Palace of the Garbage King. In the mid-18th century, this land was owned by Don Joaquim Pina Manik, a prominent political figure of his era. At the end of the 19th century, the property was passed to a man named Manuel Martins Gomes, the Garbage King.

Manuel Martins Gomes was born to a poor family in Barreiro, in 1860. In his youth, he vowed to break out of poverty and become a rich and powerful man. He worked for several years in Lisbon and saved some money  to return to Barreiro and to buy an old water mill. Upon his return to Barreiro, strange things started happening – the old mill burned down a week after Manuel signed a contract with the insurance company. Since there was no evidence of arson, Gomes received the full payment from the company.

Manuel decided to use the insurance money for buying land in the county, and soon became quite a landowner.  He also built a huge pig farm and received a permission from Lisbon to take care of the organic waste disposal.  Manuel didn't disclose to the government about the ways he would dispose of the garbage. He had a genius idea – to feed waste to his pigs, and to get paid for that.

The waste was transferred to Coina by five boats that were called "The Lame", "Beelzebub", "Lucifer", "Devil" and "Satan" - Gomes was known to  have an attitude of contempt towards the Catholic Church and to flaunt his atheism. However, by that time the Portuguese already had a very relaxed attitude towards dissent.

Contrary to his seemingly satanic inclinations, Gomes spent a lot of money on charity, opened the first public elementary school in Barreiro, created the National Agrarian Party and lobbied for its interests at state level. In the eyes of his fellow countrymen, Manuel's devotion to people redeemed  his  freethinking. After the revolution of 1910, Gomes rebuilt his palace in the way it has remained to this day.

Officially, the reason for rebuilding the palace was to make it more suitable for family life. The locals, however, were convinced that Gomes was rebuilding his palace to be the headquarters of a Masonic Lodge. This version could be plausible, since the building's architecture contains a network of underground labyrinths with numerous Masonic symbols as decor.

The Garbage King died in 1943 under some  mysterious circumstances and the cause of his death has not been established.  His palace never became a family nest. During the next few decades Palacio do Rei do Lixo passed from hand to hand, and each new owner wanted to renovate the building. Somehow, all the renovations failed,  because each time, the workers would break a contract after a few days and leave, because they believed the place to be cursed. They claimed to see the ghost of a knight with a bloody sword in one hand and a severed red-haired female head in the other. Other locals reported that every night they heard screams of a woman, sounds of her head being chopped off and the sobbing of a man.

In the mid-80's the palace was sold yet again and the new owner submitted a plan for its reconstruction. Right before the restoration works began, the palace's tower caught on fire and got completely burned. According to the locals' tales, even the fire was unholy – the flames, devouring the tower were bright blue, and when the roof of the tower collapsed, the fire turned from blue to bright orange!

Superstitions or not, it seems that the modern-day real estate developers are also being wary of the place, since no one has been trying to preserve this extraordinary building, which is a big shame.

Gallery: The Palace of Garbage King