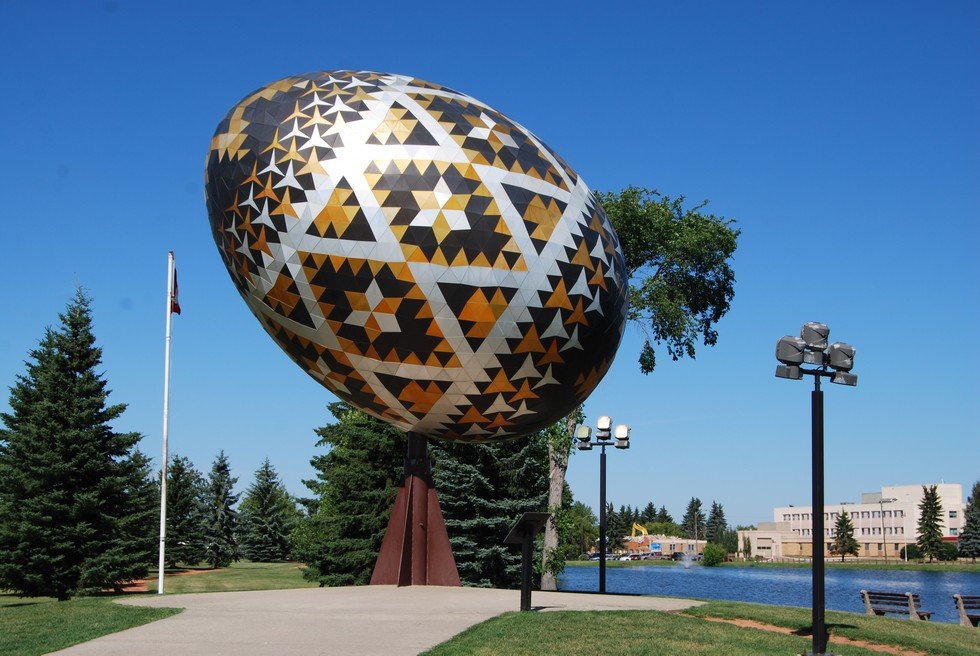 A Ukrainian Pysanka is a chicken or a goose egg, painted  with natural dyes for Easter using a wax-resist method.   Egg painting tradition originates from the Hutsul region of Ukraine and dates back to the ancient pagan days of the Sun god Dazhboh worship.  Nowadays the eggs combine both Christian and pagan symbolism.  Apparently, there is a number of monuments to pysanka eggs around the world, and the most gigantic one is situated in Canada.

The Chamber of Commerce of Vegreville took up the challenge. There were many proposals, but the winner was the giant Easter Egg, symbolizing peace and security, which the representatives of the Mounted Police were able to provide for the first settlers of the region and their descendants. It could seem quite strange at first, but when you find out that these first settlers were Ukrainian immigrants from Ivano-Frankivsk region (former part of Austro-Hungarian empire), it all makes sense

The design project of the monument was done by a programmer from the University of Utah, Professor Ronald Resch. Developing this project required creation of new computer programs. The 10-meter tall Pysanka is a huge mosaic, which has 524 stars, 1,108 equilateral triangles, 3,512 external edges and 177 internal spacers, and consists of 6,978 details. The diameter of the egg is 5 meters and its weight is 2,270kg. The egg was created out of the pieces of airplanes. It is tilted at a 30 degree angle and turns with the wind like a huge weather vane.

This project received worldwide recognition not only for its cultural value, but for the originality of its creator's mathematical, architectural and technical solutions. This was the first geometrical egg shape rendition performed by a computer.

The symbolizm of the egg's geometric pattern is rather complex. The golden stars on the base and the top of the egg symbolizes life and good fortune, the silver and golden three-pointed stars symbolize the Trinity, and the silver band around the egg symbolizes eternity. The main symbol – silver wolf's teeth, directed towards the center of the egg represent protection and safety provided by the Mounted Police for the first settlers.

In summer there is the annual Vegreville Pysanka festival, usually held in July.