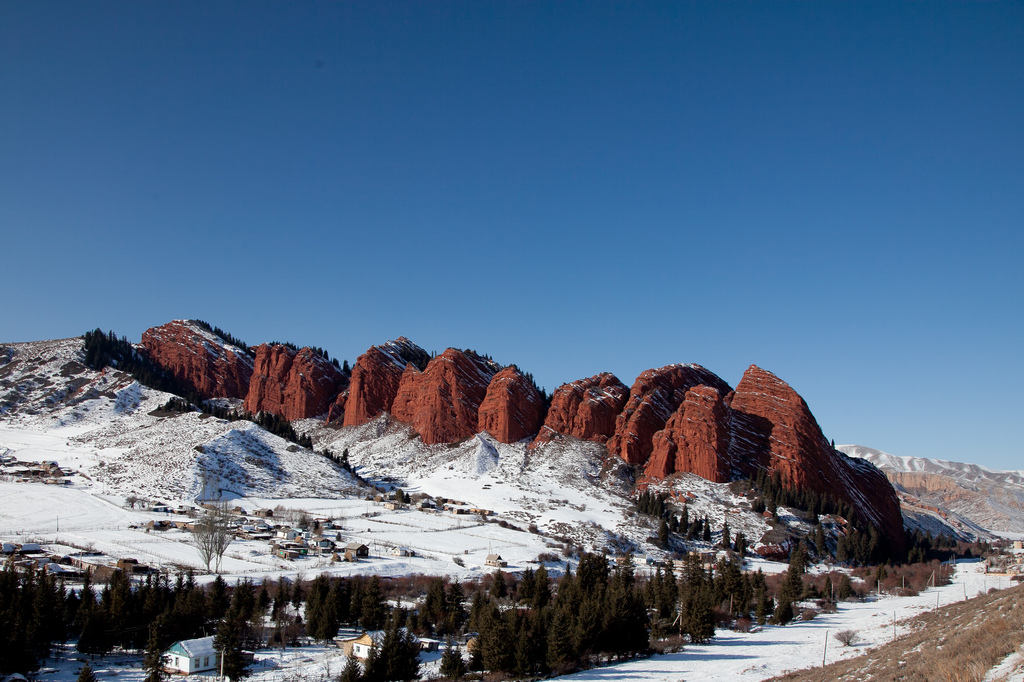 It is said that a man who has seen the mountains will love them all his life. An unexplained force will draw him to the mountains over and over again, rewarding him with a new experience each time. Such feelings overwhelm anyone who was lucky enough to see one of the most beautiful places in Kyrgyzstan – Jeti-Oguz, located 28 km west of Karakol. This beautiful gorge hides modestly in the mountains flanking the southern shore of the lake Issyk-Kul and is a part of Issyk-Kul natural reserve. There are many dark and grim legends about the Jeti-Oguz because of  unusually bright red color of its rocks. The name Jeti-Oguz means “the Valley of the Seven Bulls”. One of the biggest rocks has a bizarre shape and is called  by locals a Broken Heart rock.

One legend says that long time ago two noble and powerful khans ruled the area. One khan was particularly greedy, and he stole his neighbor's beautiful wife. The other khan declared war and demanded his wife to be returned back to him. The evil khan's decided to kill the woman and return her dead body to the husband – this way his wife will be returned to him, but he will never have her. Before  killing the woman, the evil khan arranged a grand memorial feast in the mountains. Seven red bulls were killed to prepare a meal for the revelers. When the seventh bull was slain, the evil khan stabbed the woman in the heart. Hot crimson blood gushed from her wound and painted the mountains red. Together with the blood, boiling water started flowing out of the woman's body, flooding the valley and exterminating all the guests and all the relatives of the murderous khan. Waves of the boiling water carried the bulls' bodies away into the valley, where they lay until now.

Despite the local tales of doom, many people who have skin problems or rheumatism, have been coming to Jeti-Oguz in hopes to get rid of these ailments. Hot mineral springs of the area are believed to have healing properties. Researchers found  that these springs contain high amounts of radon – a radioactive carcinogenic (when used in high doses) element, which sometimes is the last hope for a person suffering from a terrible condition.

This picturesque and romantic place with its healing thermal springs has become a great balneotherapic resort place, which, according to many doctors, is not inferior to the world famous health resort. This area is great for hiking and horse-back riding past the amazing red rocks, waterfalls, mountain lakes, and a pine-tree plantation. In summer and spring, Jeti-Oguz looks especially beautiful and festive, covered by flowers – silver edelweiss, alpine daisies and asters, poppies and golden root.

Gallery: The red mountains of Jeti-Oguz