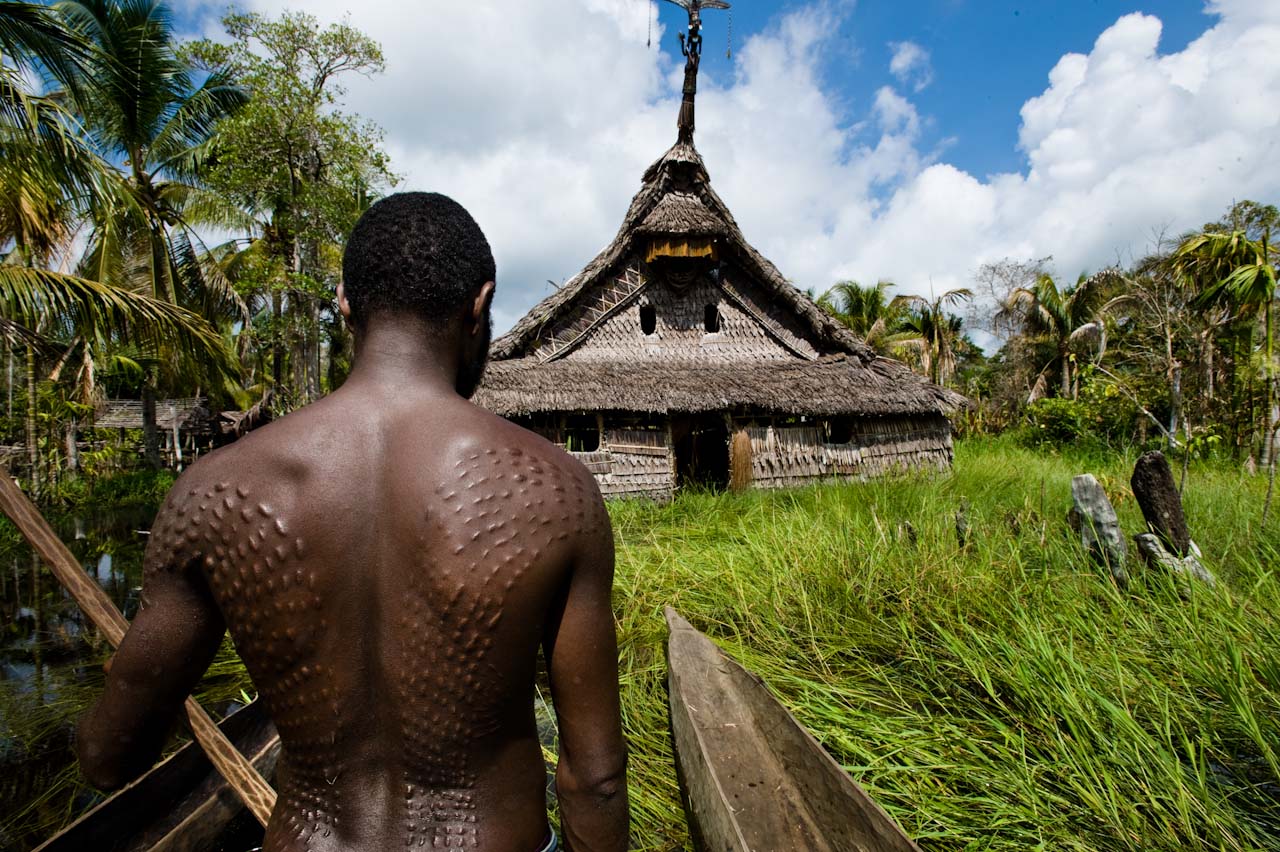 Kaningara tribesmen, who inhabit the Blackwater river, a major tributary of the river Sepik in Papua New Guinea have a rather bloody rites of passage ritual. The Blackwater river is infested with crocodiles and is pitch black in its depths because of the decaying plants. Kaningara celebrate and revere crocodiles, which serve as a pretext to the initiation ceremony for young men – skin mutilation to make it look more reptilian and to emphasize their adulthood.

The rites of passage are performed in the Spirit House, where women are not allowed. The ritual takes place every 4 to 5 years, and since it is quite expensive, families have to save money for several years to be able to pay for it. The initiates may be from 12 to 35 years old. Prior to the ritual, the men have to spend several month in seclusion in the  Spirit House, listening to their genealogies, songs and other spiritual messages, whispered to them by their parents.  During this time, they are not allowed to look or speak to women, always face the wall and never use fingers while eating or scratching himself. Besides that, they can not smoke, chew betel, eat fruit and vegetables – only fish, sago and occasional banana are allowed, and always cover themselves with a sheet when going outside to the bathroom. It is believed that if any of these taboos are broken, the initiate-to-be will soon die.

When the ritual time comes, the initiates are nicely fattened up from the two-month eating. The extra layer of fat allows the one who cuts to do it quicker. The aim of the ritual is to remove any traces of their mother's blood by skin-cutting and to fill them with the power of the crocodile spirit. The skin cutting is usually performed by the maternal uncle of the initiate. The cutter makes about 450 razor cuts , starting from the chest, which results in a lot of bleeding. After the chest cutting, the initiates are led outside the Spirit House to have their backs cut in front of the relatives and the rest of the tribe, accompanied by cheers of encouragement.

When the back cutting is done, the initiates go back to the Spirit House to heal the wounds. Kaumever tree oil and river mud or feces is then applied to the cuts, and then the young men dry their wounds by the fire.

Nowadays, the initiation is no longer obligatory – besides that the ritual itself is very expensive and many families can not afford it, many young men are encouraged to leave the village, seek education and become more modern.

Read more about Papua New Guinea off the beaten path