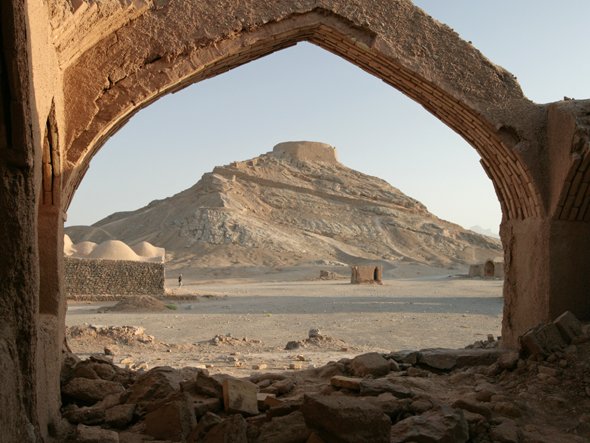 Zoroastrianism was a stable religion and had a great influence on the lives of the peoples of Iran for nearly 14 centuries. In the 7th  century Persia got conquered by the Arabs, and Zoroastrians who resisted Islam were forced to hide in remote areas or flee to other countries. Currently, most Zoroastrians live in India, where they are called Parsis. But wherever they live, they always observe their traditions. For example, the fire worship rituals are performed in special elevated temples.

According to the teachings of the Zoroastrians, we all came out of the ground, and we will return to the ground, but a dead body can not be buried in the ground, so as not to defile it. Since the earth must bloom and bear fruit, it can only receive the purified remains of the deceased. The body can not be burned either – this would defile the purity of fire. Besides that, once a body dies, it can be infiltrated by demons and become impure. In the ancient times, immediately after the death, the body would be transferred to a building called "ked", from where it was taken to a round construction called “Dakhma” and was left to be devoured by birds of prey.  A year later, the bones, bathed in rain and sun-dried, were considered "purified" and ready to be placed in an ossuary or into a family tomb for the wealthy ones. It was considered a good sign if the dead body was devoured fast. The people with dangerous diseases were also taken outside of a town and given a piece of bread and a stick to fight the hungry animals until the end.

Dakhmas were the predecessors of the Towers of Silence. Before a body was brought into the Tower of Silence, a priest would pray there for three days and perform various rituals. After that, 16 men had to deliver the body to the Tower on a metal crate. The floor inside the tower has a gentle slope towards the center, on which there are three circles – an outside circle for the bodies of men, the middle circle for the women and the inner one for the children. The bodies are left there until their bones are bleached by the  sun, wind and rain, and stripped by the vultures.  In the middle of the Tower there is a well, surrounded by a wall.  The servants of the tower come later to gather the bones and to throw them into the well, which is about 4.5 meters deep. Usually there are 4 additional wells around the main well, in case the main well becomes full.

The Tower of Silence is supposed to be built on a high mountain, so that no one can see what goes on inside, and so that it doesn't occupy a desirable piece of land. No one can enter the towers except for the servants and the body carriers, who are supposed to purify themselves after being in the tower with a special liquid called “nirang”.

Nowadays there are not so many priests who know all the rituals to build a Tower of Silence. The corpses were still found on top of the remaining Towers of Silence in Yazd, Iran until 40 years ago. As Iran was developing and its cities were expanding, some of  the towers were destroyed and since the 1970s their use was prohibited. Although the remaining Towers of Silence can not be used anymore, you can visit the place and have a look at the ossuaries in the area.

Gallery: The Towers of Silence in Iran