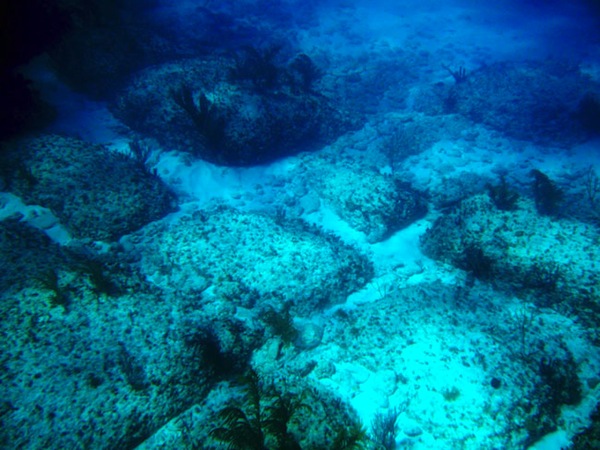 The mystery of Atlantis inspired many writers, film makers, scientists, adventurers, psychics and charlatans. One of the curiosities attracting the attention of many in the modern day is the underwater Bimini road in Bahamas.

Americans, and the rest of the world after them, learned about the existence of this strange underwater road in 1968. An American pilot, flying over the island of Bimini on the way home, saw a strange construction in the clear blue waters, and immediately alerted journalists about it.

At the depth of 3 to 9 meters there were two parallel road-like lines made out of giant slabs of rock. This "road" was about 90 meters wide and 500 meters long, surrounded by constructions of various shapes and sizes. Some of them resembled cobblestone squares, some looked like roofs upon pillars and walls.

What is surprising is that the native inhabitants of the Bahamas knew about this place for a long time and had their own theory about its purpose, according to which, this is the place where god blesses people before they are born into existence.

After the press made the place famous, hundreds of researchers and adventurers flocked to the island of Bimini, to see what they believed was the remains of Atlantis. When divers discovered not only the road but also dolmens, paved areas, and even a semblance of the temple, it was decided to take some of the pieces out of the water for examination. The results were quite shocking - the age of stone plates was about 14,000 years, which corresponds to Plato's writings about Atlantis. The stone plates' composition clearly pointed to the fact that they were formed on land and then sunk into the water.

Delighted, the researchers began to raise the plates from the bottom of the ocean, one after another, and during the analysis of one of the underwater structures, another surprise was waiting for them - the age of one plate turned out to be twice as much as the rest of them. This brought about another incredible theory that the inhabitants of Atlantis were the ones who ordered this construction from aliens, who supplied the stone plates.

Skeptics had two main theories about Bimini road. One is that the road and the facilities are of natural origin and were not built by anyone – they adapted shapes similar to human structures as a result of underwater volcanic eruption. The other one is that these stone slabs are just ballast dropped by ships during their voyage. It is true that in the ancient times big rocks were used as ballast, however it would take about 100 ships to drop all the stones at Bimini, which is strange. Further analysis of the blocks, and carbon dating led to a conclusion that the blocks are formed naturally, and there was no evidence of tool marks.

There is still speculation and research on Bimini today and Bahamas government sponsors the work of divers, archaeologists and scholars to examine the underwater road further, and for the ordinary tourists there is one more attraction besides the white sandy beaches to take pictures of.