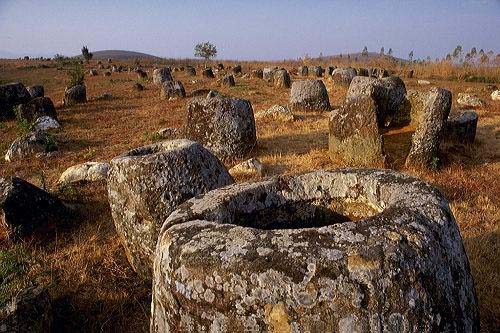 The Valley of Jars in Laos is a territory consisting of 60 land areas with unusual stone vessels of uncertain origin laying around. This strange place is located in the province of Xieng Khouang .

The estimated age of these weird findings is 2000 years old, but  who created them and with what purpose remains a mystery. According to Laos legends, these ancient  jars were the utensils of giants who lived in this valley thousands of years ago - the jars were created by the king of the giants, Khung Cheung. After winning a long battle, Khung Cheung created the jars to brew massive amounts of lao lao rice wine to celebrate.

Scientific versions suggest that the vessels were used as funerary urns or containers for the collection of water, or for storing rice wine. Despite the global divergence of views on the practical application of these stone jars, no one can prove their real purpose.

Most jars have a cylindrical shape, but sometimes there are jars shaped like cubes as well. The size of the jars ranges from 0.5 to 3 meters, and the weight of the largest specimens is up to 6 tons. In the same region circular stone disks were found, which may have served as lids for the jars. To preserve this unique place, the Valley of the Jars was put in the UNESCO World Heritage list.

In 1930s, Madeleine Colani from France conducted the first archaeological research at the location. She discovered a cave with burial remains and ashes in the vicinity of the valley. The cave required a long and detailed study, but despite all the hard work of historians and archaeologists, no sufficient information was collected to prove anything.

During the civil war in Laos, the location was bombed by the American Air Force.  The explosions destroyed the cave and damaged a significant number of the stone jars. Moreover, many of unexploded pieces that remained in the ground posed a threat for the researchers, which slowed down the scientific process significantly.

Recently, local volunteers managed to remove the unexploded bombs from 3 areas with the jars, to make them accessible for both the researchers and the tourists. Thanks to these brave people the world could see some photos from the Valley of the Jars. Nowadays, any visit to the Valley of the jars takes you past the bomb craters.

Gallery: The valley of the giant jars in Laos