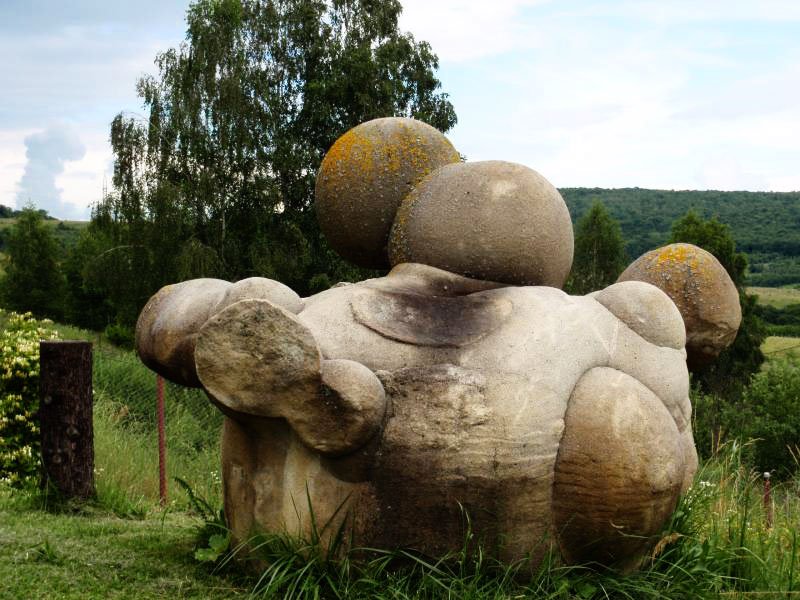 The natural museum,  Muzeul Trovantilator, is  located in the south of Romania among the sandpits of Valcea region, outside the village of Costesti. This place is famous for its "living" stones, referred to as Trovant stones. The locals noticed that the roundish stones grew every time it rained, as if they were alive.

The weight of Trovants ranges from a few grams to several tons, and the largest of the samples is about 10 meters tall. The most interesting thing is that these huge boulders used to be pretty small some years ago. Apparently, the  smaller the stone, the faster it grows. The growth process of Trovants reminds that of a pearl formation, and if you split a Trovant in half,  you can see shapes that resemble tree rings.

According to geologists, the  reason behind the growth of stones is their high mineralization property. The rainwater activates a chemical reaction inside a Trovant, and because of the inside pressure, caused by this reaction, the stone increases its size. What is not explained yet is how these stones breed.

It is known that the upon being exposed to water, the side of a Trovant swells up and starts growing. When  the swollen part  reaches a certain weight, it breaks off. However, the interesting fact is that the structure of this newborn Trovant  is very similar to the parent rock, and the newborn will have their own nucleus. This process is reminiscent of budding – the reproduction mechanism of some unicellular organisms.  This makes the scientists wonder whether Trovants might be an unknown to mankind inorganic form of life.

In Romania, these strange stones have been a common knowledge for at least two centuries, but nobody really attached any importance to them: Trovants are often used for construction purposes. In the Trovant natural reserve, where you can see the largest accumulations of these amazing lumps, you can get a Trovant souvenir and take it home. The people who got Trovant souvenirs claim that they grew bigger when exposed to water, and sometimes even move around the house, however the latter hasn't been officially confirmed.