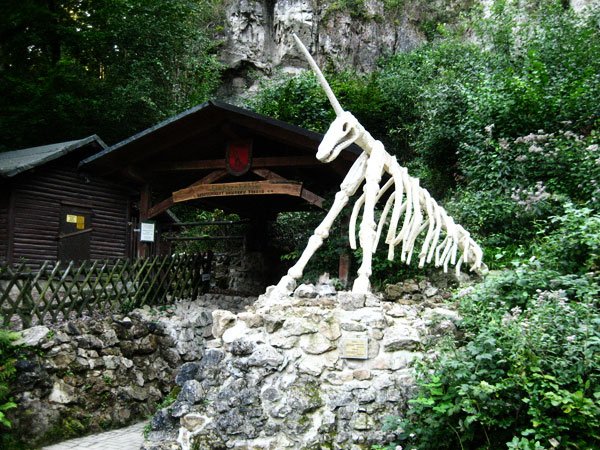 Every year on Christmas the crowds of tourists from different countries gather in the Harz Mountains in Germany, hoping to see a unicorn. People believe that if this mythical beast is seen on the Christmas Eve, all your wishes will be fulfilled.

Since the ancient times Harz mountains were considered to be the dwelling of the unicorns. This is where the Cave of the Unicorn is located. Even Julius Caesar wrote  in his "Notes on the Gallic War" about sending his soldiers to Harz forest in search of the magic horse with a horn on its head. Although t's been two thousand years since the reign of Caesar, people are still trying to find a unicorn in the mountains.

A geologist and paleontologist Ralf Nielbock has been exploring the mysterious Unicorn cave for three decades. He tells the story how the cave got its name - there is a legend of the unicorn and a witch who lived in a cave nearby. The people would flocked to her, seeking healing, but this made the Inquisition very angry. They sent soldiers led by a monk to arrest her. When these people came to her cave, they saw a unicorn come out of the woods with its horn glowing. The woman climbed on its back, and they fled.  The monk ran after them. Neither the unicorn nor  the witch were ever seen again. However, the soldiers found a cave with the monk laying dead, and since then this place became known as the Cave of the Unicorn.

Harz has always been known as the most mystical mountain region of Germany. Since the olden days it served as a place for the female Moon worshippers in order to achieve eternal youth and beauty. According to a legend, upon hearing their chanting,  the goddess of the Moon would appear in front of the worshipers riding a unicorn.

The legend was proven to be true by the mayor of Magdeburg, Otto von Guerike, who also deemed himself a researcher of the unknown,  found strange animal bones in the cave in the year 1663. The great scientist Gottfried Wilhelm Leibniz, having studied the discovery, stated emphatically that the bones made him once and for all to believe in the existence of the unicorn. Afterwards, a skeleton was assembled out of these bones, and it still adorns the cave's entrance. This construction looks rather strange: the beast stands on two feet, and the tail area is supported by a bone resembling a wheel.

As Nielbok says, Leibniz couldn't have known what we know today.  The majority of bones found in a cave belonged to a mammoth, and the tail of an imaginary unicorn is, in fact, a piece of a mammoth tusk.

In 1991,  a Professor of the University of Gottingen,  Antal Festetics,  was filming a documentary about the composition of the Harz mountains' rocks. During one of the shootings he claims to have seen that unicorn galloping toward him, emanating light. He even had a chance to photograph the unique beast! This shocking photo shoot led many people to believe in a fairy tale yet again.