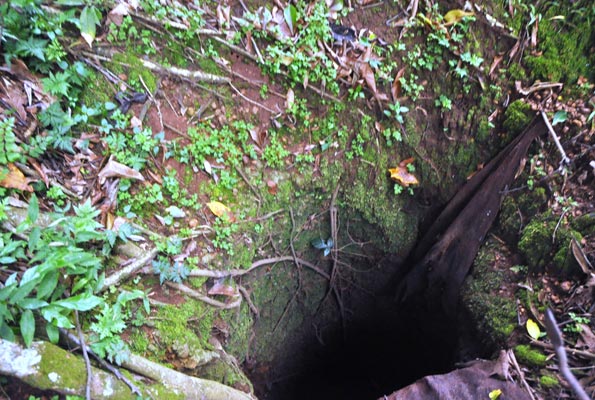 Walumbe Pits, a.k.a. Tanda Pits are still shrouded in mystery. They are located on the Tanda hill, 8km from Mityana town in Uganda.  Animals seem to keep away from this place, and the people who dared to go down into the depths of the pits, said that they were overcome with inexplicable horror. This place is considered to be the deadliest in Uganda.

The word Walumbe means “death”.  According to the legend, in the ancient times, there was only one person living on Earth, and his name was Kintu. Ggulu, the creator of all, lived up in heaven with his children, who sometimes descended to Earth to play. Ggulu's daughter Nambi took a liking to Kintu and decided to marry him. After Ggulu finally agreed, she was advised to leave their heavenly abode quietly, so that Walumbe, the bringer of suffering and death does not follow her. Unfortunately, Nambi forgot to bring chicken food with her and decided to come back. Walumbe started suspecting something, and descended to Earth with her, thus bringing death and suffering. Ggulu got very angry at his Walumbe and ordered his brother, Kaikuzi, to return him back to heaven. Walumbe was no fool, and decided to confuse his pursuer by burrowing into various places in the ground. Eventually, Kaikuzi gave up on his search and returned to heaven. Happy and content, Walumbe re-emerged at Tanda and remained on Earth, bringing death and disease to the people.  Because of this, Tanda hill has more than 200 amazing pits – the pits of death, where Walumbe was hiding from his brother.

Walumbe pits are recesses in the rock, 1.5 meters wide and up to 70 meters long), going vertically downards into the ground. There are 240 pits, and their total length is no more than six kilometers. These pits exist in other areas of Uganda, but less than on the Tanda hill. The pits are looked after by the local Walumbe worshippers, who walk barefoot and wear black tunics.

Scientists were not able to determine the age of these pits – supposedly they are several centuries old. It is also unclear how people managed to dig through the rock back in those days, since they only had primitive tools and their hands to work with.

Besides the old myth, the locals have another version about the origin of these pits. They say that in the 13th century the place was populated by the light-skinned Bachwezi people, who had supernatural abilities to fly, climb the steep rocks, cure all diseases and see the past of people in other places on Earth. They are the ones who dug out the pits and built cities in the area. In the 14th century, Bachwezi suddenly disappeared into the unknown, leaving the pits and the ruins. After excavating the area,  archaeologists found  some items that were manufactured using the technology unknown to the local tribes.

Many adventure seekers like to travel to the area, but it is advisable to do that with a guide, because the pits are overgrown with thick grass and are not very visible, so you can easily fall in and make Walumbe happy.

Read more about Uganda off the beaten path

Find more off the beaten path near: Kampala