Richat Structure - the Eye of Sahara 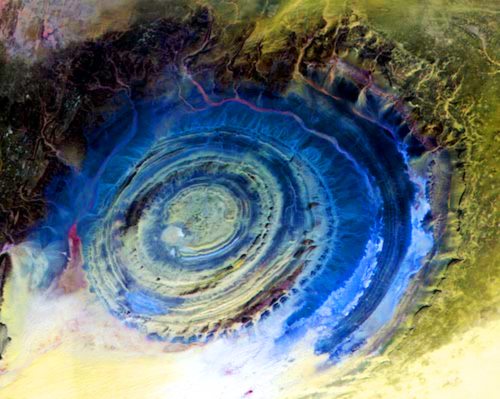 Richat Structure, or the Eye of the Sahara, or the Blue Eye of Africa (Guelb er Richat) is an amazing circular geological formation located in the Mauritanian part of this arid desert, just outside of Ouadane. The lifeless area of this crater resemble lunar landscapes. The diameter of its outer circle is 50 kilometers. From space, Richat Structure looks like a bull's eye which also served as a landmark for the early astronauts when they flew over Sahara.

There is no unanimous agreement on the origin of this natural phenomenon, which emerged about 600 million years ago. Initially, the structure was considered a site of a large asteroid collision with the Earth's surface at a right angle, because of its circular shape.  Another version suggested that Richat was a crater of an extinct volcano, which was gradually collapsing inward during millions of years – this was later deemed improbable because of lack of volcanic or igneous rock in the place. Of course there is an assumption referring to the alien origin of the place, or to Atlantis – according to Plato, the island of Atlantis was circular, divided into circles of land and water.

Yet most scholars are inclined to think that the structure is the result of erosion – Richat was a  geologic dome, which has been gradually shedding layers and eventually became flat. However, there is still a flaw in this hypothesis – the scientists still can not explain the rather sharply defined boundaries of Richat Structure and the fact that its rings are equidistant to the centre.