The bones of Smok Wawelski - the Dragon of Wawel 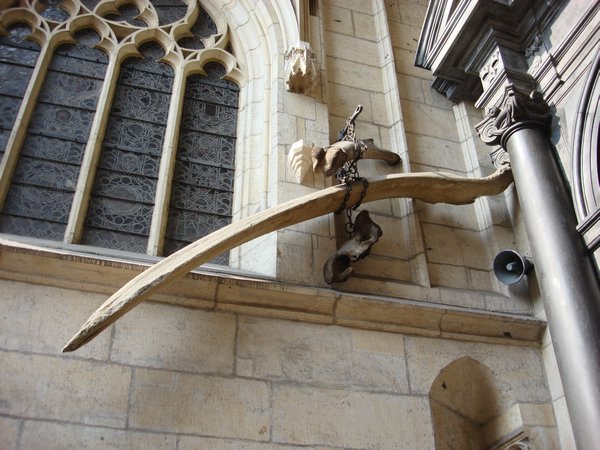 At the foot of Wawel hill by the Vistula river there is a small cave, which is called the Dragon's pit. Once upon a time this place was a shelter for Krakow vagabonds. Over time, authorities decided to get rid of this troublesome individuals and walled the cave. The Dragon's pit was reopened only this century, but now for the tourists who are willing to listen to the story of the famous Smok Wawelski , the dragon from the Polish folklore, who used to dwell in the cave long before the vagabonds.

The legend dates to the time when Prince Krakus ruled the area. He was a wise ruler, and under his leadership the city grew and prospered. Everything was going fine for the people of Krakow, but  nothing good can last forever - a huge, green fire-breathing monster with razor-sharp teeth spawned in the cave near the city. The people, of course, were terrified, because this was a serious threat for them and their cattle. The beast would devour animals and lonesome travelers on their way to Krakow. In short, the dragon ate well, grew rapidly, and with it grew its appetite.

The elderly Krakus was no longer able to fight the dragon by himself, so he invited volunteers to try this challenge in exchange for his daughter as a bride and half a kingdom as dowry. All the Polish daredevils flocked to the city. However, the dragon seemed to be invincible – none of the heroes managed to kill it.  Eventually, everyone in Krakow lost hope.

Suddenly, the real folk hero appeared - a nondescript puny lad, a cobbler's apprentice, called Skuba. Naturally, people laughed at him, since he had no heroic features or skills. But Skuba was a cunning fellow - he slaughtered a sheep, stuffed it full of sulphur and resin, and left it by the dragon's cave. The dragon devoured the sheep and started combusting from inside.  To extinguish the fire in his belly, he started drinking water from the Vistula river, and he drank until he burst. And Skuba made funky boots from the dragon's skin.

Skuba's victory was commemorated by making a hill near Krakow, which is still there, as well as the Wawel dragon's bones, right in front of the Cathedral of Wawel on that same hill. The Cathedral and the King's castle are one of the finest examples of Polish renaissance architecture, which are open for the visitors to explore. The fire-breathing sculpture of the dragon is also there. The dragon's bones on display are actually believed to be fossilized mammoth or dinosaur remains.

Read more about Poland off the beaten path