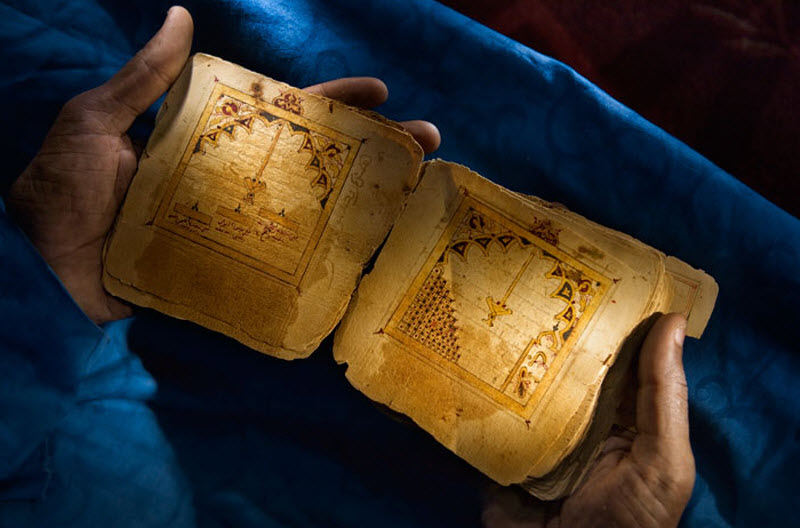 Five hundred years ago, the exotic and mysterious city of Timbuktu, the unfathomable enigma for Europe, was the intellectual, cultural, and commercial center, the center in the whole of West Africa. Founded around 1100 AD by nomadic Tuaregs, the city sheltered a huge number of private libraries and thousands of students.

Timbuktu was at first a simple village – a resting place for shepherds who sought refuge from the hot desert of Sahara on the cool banks of the Niger River. Nomad settlements soon gained great popularity and became a center of gold and salt trade, gradually attracting not only merchants, but also cultural and academic elite of the time. Being located on the strategically important territory, where the desert meets the river, Timbuktu was the gate, through which African goods were exported by traders to the Mediterranean, European and Arab states.

By the fourteenth century Timbuktu reached its peak as a metropolitan city and as the Islamic Educational Center. By the end of the XV there was a vast number of schools and more than eighty private libraries.  Rumors of priceless manuscripts stored in libraries of Timbuktu, spread throughout North Africa, Arabia and even Persia. When the European Renaissance was just gaining force, this exotic city on the edge of the Sahara Desert had already been established as the cultural center with a rich literary tradition.

However, in 1591 this miracle was destined to perish under the onslaught of Moroccan invaders. Many outstanding scientists who lived in Timbuktu, were forced to flee or were relocated ny force to the northern regions of Africa. Now Timbuktu is a town in one of the poorest countries in the world. It is a sleepy and decrepit town on the southern edge of the Sahara, which, however, has not lost touch with his legendary past.

Thousands of valuable manuscripts are kept in private collections and in family archives of Timbuktu residents today. The manuscripts are family heirlooms that were passed from generation to generation for many years. The Manuscripts of Timbuktu (some are from XIV century, written mostly in Arabic) bear invaluable evidence that in the Middle Ages this place used to be a religious and a cultural center, and document the most important trade routes of merchant caravans across the Sahara.  As early as 1967, UNESCO recommended creating a preservation center for Timbuktu manuscripts.

In 1973, the Government of Mali, having received financial assistance from Kuwait,  opened the Ahmed Baba Centre, which keeps more than 18,000 ancient manuscripts. However, these are just 10-15% of the infinite cultural heritage located in the region. Scientists estimate that in the Timbuktu town there is no less than 100,000 manuscripts, and 700,000 to a million manuscripts alltogether in Mali.

Scientists believe that in their cultural and historical significance the manuscripts of Timbuktu can be compared with the famous Dead Sea Scrolls. They are a symbol and the essence of African Islamic medieval culture. The texts written in both Arabic and African languages shed light on the historical role of Timbuktu as a guardian of peace in a very troubled region. Ancient manuscripts of Timbuktu demonstrate a vivid example of peaceful coexistence and tolerance in a multicultural world. There are manuscripts on various topics and subjects - such as mathematics, chemistry, physics, optics, astronomy, medicine, theology, history, geography – most areas of human knowledge.

During the occupation of the north of Mali by al-Qaeda in 2012, the residents hid their manuscripts and buried them in the backyards. Out of 40,000 manuscripts from the libraries 4,000 manuscripts - among which were many old Quran writings - were burnt by Islamic radicals, and 10,000 remained intact. The rest was transferred to the capital of Mali, Bamako, where Abdelkader Maiga, a director of the institute created a storage for the manuscripts in one of the homes in a suburban neigborhood.

The owner of the Mamma Haidara Commemorative Library donated the digital images for everyone to see. Some manuscripts, which were taken in the colonial time can be seen in London, Paris and other cities.  An exhibit of some items is also available at the Library of Congress.

Besides being ravaged by time, the manuscripts are facing other threats  - improper storage conditions, being illegally sold at the art market or being sold by the poor refugee families for a piece of bread to survive.

Read more about Mali off the beaten path