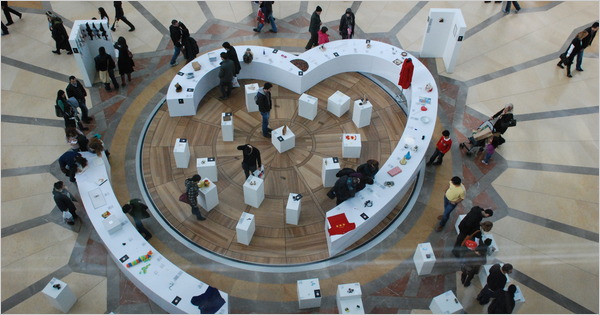 In the vicinity of St. Mark's Square in Zagreb there is a very interesting museum – The Museum of Broken Reationships.  In 2006, the artists Olinka Vistina  and Drazen Grubisic decided to opened the museum in memory of their separation, which works on the “could have been worse” principle. Notably, visiting the museum does help many brokenhearted people – when the visitors see that many others are suffering as much as they do, their broken hearts begin to heal.

According to Drazen Grubisic, there is always something left behind when you separate, and we tend to keep the things that remind us of our lost love and pain. Before opening his exhibition, Drazen went all over Europe with the mobile version of it, and it conquered the hearts of many. Nowadays, the collection is being constantly updated, with new exhibits that the museum receives from the brokenhearted contributors -. letters, cards, toys, wedding dresses and other things associated with sad love stories. Each item on display has a detailed description of the break up story connected to it. You can find quite unusual things among the exhibits, for example, an ax sent by a German lesbian, which was acquired by her after the break up, a "Broken Love Letter” written by a girl from San Francisco – she glued the letter on the back side of the mirror, and then smashed it into hundreds of small pieces. The exhibit "Shampoo for intimate hygiene" has another funny story behind it – a guy took all his things when he was leaving some girl, besides  his intimate shampoo, and the girl's mother started using it for washing dishes.

This museum attracts even those people who are not into museums at all. In 2011, the Museum of Broken Relationships was voted the best museum in Croatia. To this day it hosts exhibits from citizens of various countries, so if you have a desire to share your break up drama, you can donate something as well.

Read more about Croatia off the beaten path