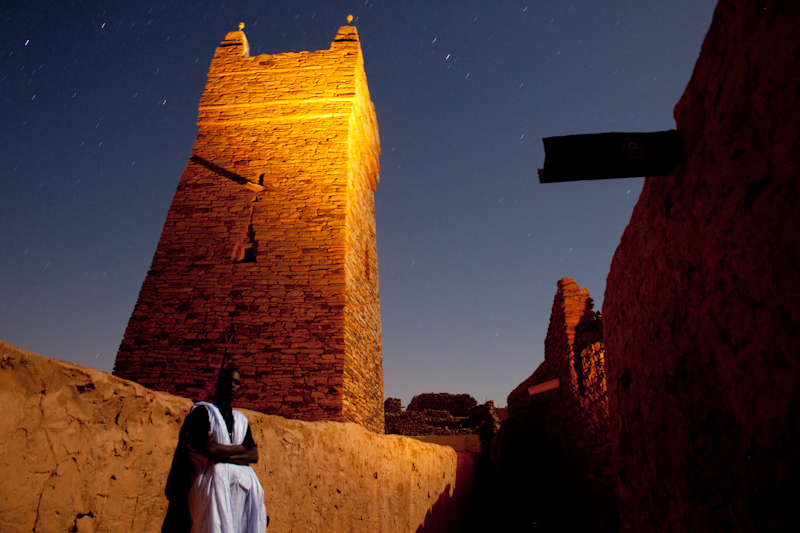 Nowadays a forgotten city, consumed by the desert sands, Chinguetti, Mauritania, used to be one of the most important centers of Islam in Africa and was the prime location at the crossroads of several caravan routes between the 12th and the 16th century.

Some Muslims believe Chinguetti  to be the seventh most important holy city of Islam. Chinguetti was established in 777, and the development of trade in these harsh conditions made the city prosper and become a learning center, assimilating various cultural influences. Chinguetti was a city of books and knowledge. Besides Besides Koran, madrassas had subjects like medicine, astronomy and rhetoric. Large and small libraries still exist in the modern city, and some of them contain very valuable texts.

Current inhabitants of Chinguetti try to preserve the city's history. Numerous mini-libraries and mini-museums feature private book collections. The libraries contain about 1,300 manuscripts. In the 18th-19th centuries. Chinguetti turned into a magnet for scholars and pilgrims all over the Muslim world. In addition, Chinguetti is considered the starting point of the hajj for pilgrims from nearby towns.

The Great Mosque of Chinguetti, built in the 18th century due to the influx of pilgrims,  defies the expanding Saharan sands to this day. This construction, built out of the roughly hewn stones was once used as a fortress by the French Foreign Legion. On top of the square minaret there are spheres, shaped as bird eggs, which symbolize Muhammad's birthmark between the shoulder blades. This is how Bahira, the monk, recognized the boy as the prophet.  In many African religions egg symbolizes fertility and life, and the egg-shaped spheres on top of minarets indicate that African beliefs were mixed with Islamic traditions.

Chinguetti is marked as a World Heritage site by UNESCO, and efforts are being made to preserve the city and its libraries from desertification, despite the local political turmoils.

Gallery: The ancient libraries of Chinguetti