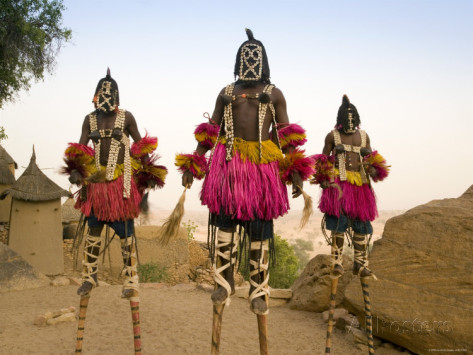 For many centuries Dogon tribe has been living in the remote Bandiagara highlands in Africa. Until the 30s of 20th century this area, situated on the central plateau to the south of Niger river in Mali, was considered one of the most isolated in Africa. Technological progress has not affected Dogon lifestyle. The Dogon live in caves, gathering food and fishing, just like thousands of years ago. Dogon is one of the few tribes who continue to live in accordance with the traditions and ancient beliefs of their ancestors.

Dogon tribe is most famous for its ritual masks, worn by Awa dancers in the village of Senga. There are three cults among Dogon – Awa, Lebe and Binu.  Awa is a cult of the dead.  According to Dogon mythology, one that wears a mask during a dance, connects the world of the living with the world of the dead. This is how tribesmen communicate with their ancestors. Dogon Awa masks are not symbolic and do not represent particular characters. They are the keys to the spirit-world, which fuse and become one with the dancer who wears a mask. The masks are considered to be sacred and mere mortals are not allowed to own them or to know where they are kept.

Dogon women have no right to participate in ritual dances, however, they can wear special masks while being on tall stilts, which symbolizes woman's high status.

Some researchers, who studied the myths and beliefs of Dogon, found evidence that the tribe has a very broad and accurate knowledge of astronomy and the solar system. The famous anthropologist Marcel Griaule,  who studied the habits of the people of West Africa in the 1930s, claimed that the Dogon - is one of the remaining groups of ancient people who lived in Sudan and Mali long before our era.  Griaule saw ancient rock paintings, which, despite their primitivism, had complex contours of the planets and their orbits. One of the main celebrations of the tribe is Sigui, which takes place once every 50 years, when the distant planet Sirius completes a full revolution around some unknown star.

Dogon creation myths tells that the source of all living things was god Amma, who was shaped like a sphere. As a result of the Big Bang, the sphere started expanding, and continues to do so today.  Amma ejected a cube-like object, which later took a shape of a ball as well, and formed Mother Earth.

According to the tribesmen, they received astronomical knowledge from the alien god Nommo, who was the first living creature created by Amma, and descended from the sky in a vessel during a violent cataclysm. Once Nommo appeared on Earth, the cataclysm ended.

Whether we should tie Nommo to the evidence that our planet was visited by an extraterrestrial culture or just to a myth, which is similar to many others, is up to our individual beliefs. No scientific proof supported that Dogon participated in close encounters with aliens has been provided so far.

Another interesting tradition of Dogon tribe is fox divination. The Pale Fox, Yurugu, is the son of Amma, who upsets the harmonious universe of dualities because of not having a twin. Since the Pale Fox was lonely without a twin brother, he was tempted to commit incest by raping his Mother Earth, and through this he gained knowledge of the “second word” of Amma, which possesses creative power – nyama. A fox is seen as a delinquent son of god who reveals secret knowledge to people. Dogon diviners leave food for foxes on the borders of their villages, and then decipher their cryptic patterns of footprints the following morning.

Nowadays, the population of Dogon is about 300,000. They live in small villages with populations of less than 500. Their villages are built on steep sandstone cliffs, and create a spectacular view of the structures built on the sides of the escarpment. To this day, the exact origin of the tribe is undetermined.

Read more about Mali off the beaten path