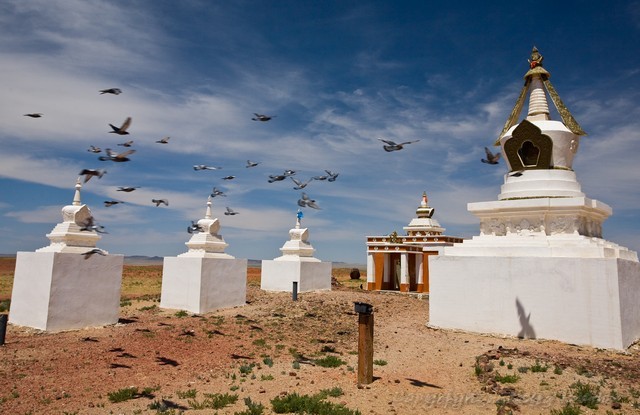 Surely many people, at least vaguely heard about the mystical Shambala. Whoever is familiar with the culture of the East, know that Shambala is a mystical land, populated by highly spiritually developed people and creatures. It is also believed that Shambala - is the center of the world, a life-giving source to all on Earth.

The first mention of the Shambala  is found in the Buddhist text, Kalachakra Tantra (X century), which has been preserved from the times of the King of Shambala – Suchandra, who received the Kalachakra teachings from Buddha Shakyamuni. According to another legend, Shambala was a kingdom in Central Asia. The king of Shambala aquired his knowledge in south India. After the Muslim invasion of Central Asia in the IX century, the kingdom of Shambala became invisible to the human eye, and only the pure of heart can find the  road to this kingdom.

Many looked for Shambala, though no one has ever found it. The Buddhist teachers and high lamas always knew where Shambala was, but according to the ancient proverb, "he who knows does not speak, who speaks does not know ..."

According to the legend, there are several entrances to this mythical land, and, to be more precise, there are three. Nicholas Roerich, a famous Russian painter and a theosophist, searched for Shambala in ridge Kailas inTibet (which is considered one of the entrances to Shambala) , and in the Altai near Belukha. There is another entrance, and it is located in the Mongolian Gobi Desert.

In the 19th century there lived a monk in Mongolia - a follower of the Red Cap Sect- Danzanravjaa . He was born into a poor family, his mother died early and his father had to be a beggar to survive. That is why in 1809 Danzanravjaa  was sent to a monastery. Since the early age, the boy was very gifted and after a few years he was recognized as a reincarnation. Thus began the life of the great saint and a prominent Mongolian social and religious figure.

There are many legends about the fact that Danzanravjaa  was a miracle worker and a prophet. He went to Tibet to collect medicinal herbs, which let him dissolve in space and materialize elsewhere. He predicted many events, in particular, the date of his death -  he was poisoned by his wife in 1856,who was the head of the Yellow Cap sect. According to legend, he knew that he was going to be poisoned, but he still took a drink to fulfill his destiny.

Among the wonderful predictions of Danzanravjaa  there were also instructions on where to find Shambala! The Mongolian saint gave the exact coordinates of the entrance to the mystical land and erected a monastery in the vicinity of the place in 1812. The monastery was destroyed in 1930 and then  restored.  This monastery is located near the town of Sainshand in Dorno-Gobi-Aimag  in the eastern Gobi.

The  Khamryn Khiid  monastery is the beginning of the road to Shambhala. The road goes through the desert for 3 kilometers, and is decorated with the Buddhist stupas. In the vicinity there are several wonderful places.  Among them is the cave monastery, where 10 Mongolian monks lived and meditated. Just down the road to the caves you can see fossils that are more than 1.5 million years old. As we know it is in Mongolia where 80% of ancient fossils and dinosaurs remains are still being found. It is strictly prohibited to dig out the fossils and take them with you as souvenirs. 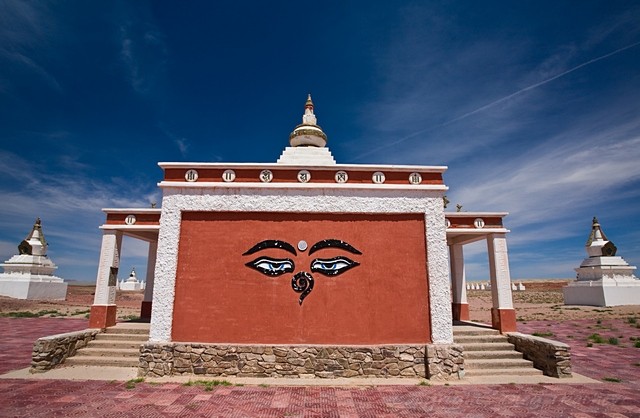 In the end of the road, you arrive to two temples – the Gelugpa (Yellow Cap) wisdom temple on the right and the Nyingma (Red Cap) compassion temple on the left. The central gate to Shambala has two doorways – the Golden Doorstep and the Silver Doorstep. You are supposed to enter through the Golden doorstep and leave through the Silver Doorstep. Upon entering, you should leave all harmful thoughts and think only pure thoughts while in Shambala. After entering, you can see the ring of rock, known as the Twelve Year Circle. In front of the circle there are three ovoos representing the Future, Present and Past. (An ovoo is a shamanistic cairn, made from rocks or wood.) According to the tradition, if you put a white stone on the Ovoo of the Future while saying your last name and then your first name, you will be reincarnated very fast after you die.

The Maidar's circles on the ground make up a line which points to Khairkhan Uul, the mountain where Danzanravjaa's spirit is supposed to reside. The center of Shambala is the Brain Ovoo – it is the central point of energy of Shambala. The monks claim that when there are dust storms, the only place that is always calm is the Brain Ovoo.

There are various tours available, short and long ones, which, besides a visit to Shambala, incorporate visiting other interesting places in Gobi desert.

To get to the place, you will have to go to Sainshand, which is a yurt-camp about 20 kilometers from Shambala. It costs $10 per night to stay in a yurt, and $10 per day for breakfast, lunch and dinner.

Gallery: The mystical Shambala of Mongolia

Read more about Mongolia off the beaten path

Find more off the beaten path near: Gurvansaikhan Ulaanbaatar