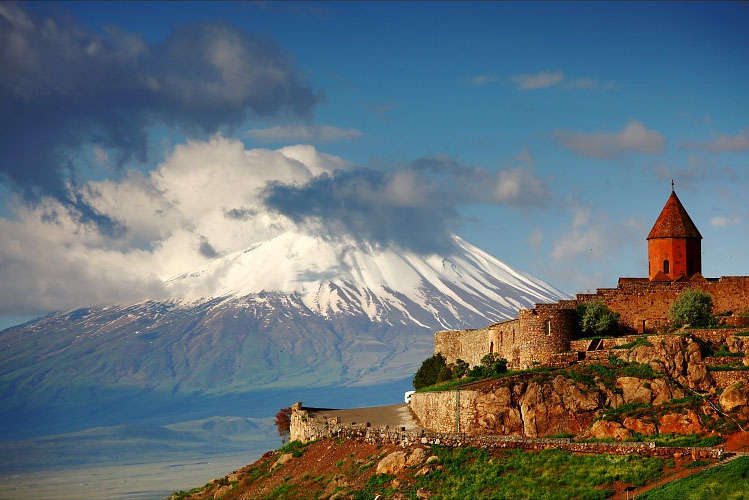 Being the first country to adopt Christianity as the official religion in 301 AD, Armenia is a country rich in holy sites such as Khor Virap Monastery. It is a sacred place where Saint Gregory the Illuminator (or Grigor Lusavorich before sainthood), the patron Saint of Armenian Apostolic Church, spent thirteen years imprisoned for spreading Christianity at the time of the pagan ruler, King Tiridates III. Tiridates III was not happy about Grigor not offering sacrifice to the pagan goddess Anahita and about the fact that Grigor’s father murdered his dad – he subjected Grigor to severe torture in the dark dungeon.  During his years in prison, Grigor became a religious mentor to the King. Naturally, as the King turned Christian, so did the entire country.

Located on a hill 30km south of Yerevan, the capital of Armenia, the Monastery of Khor Virap serves as one of the most popular tourist and pilgrim destinations. Standing before the magnificent Mount Ararat, it offers an amazing view of the mountain, which is the national symbol of the country, and a stunning view of the Araks River. Noticeable, the Bible says that Noah’s Ark landed exactly on the Mount Ararat during the Great Flood, giving the second birth to the Human Race.

The monastery is said to be established in 642 AD. However, the ground-level buildings were rebuilt many times. You can still visit the pit where poor Grigor was incarcerated by going through the underground dungeon of St.Gevorg Chapel. .. The cell itself looks like a circular room about 4,2m wide (14 feet) and 7m deep (23 feet) – rather claustrophobic. ”Khor Virap” actually means a deep well or a deep dungeon. Inside the monastery there are several chambers which are allowed to enter. You can have a look at the altar, stone walls, candles, long ladders and feel the chilling atmosphere of the prison.

Another attraction of this site is the large St.Astvatsatsin church, built in the 17th century. You can stroll along the courtyard and try to imagine how it used to be when this hill and its adjoining territories belonged to the historical capital of Armenia, Artashat, around 180 BCE.

On the weekends the priests of Khor Virap are particularly busy. A lot of people visit the holy place to be baptized. They also perform a spectacular ceremony called ”matagh” – a sacrifice of sheep or chicken after performing a wedding ceremony. Once you see it with your own eyes, you will definitely remember it forever.

The monastery is 4km off the main highway through the village of Pokr Vedi. The trip from Yerevan won’t take more than 45 minutes.

Tony Owens said on Jan 15, 2017
Thank you for the pictures and the historical background of Khor Vidap. I am moved by the Love of God through his son Jesus for us and the devotion of a man to stay faithful and not embrace pagan beliefs.
SHARE IT