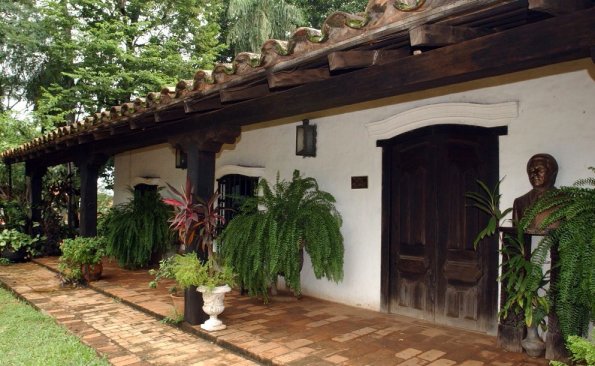 The Mythical Museum Ramón Elías is located in Capiata, Paraguay, and is dedicated to preserving the ancient mythology and culture of the tribes that lived on the country's territory.  Don Ramón Elías is considered the father of images of Paraguayan mythology. His hobby was restoring antique objects, and in the 70s he traveled through the country, talking to indigenous peoples and collecting antiquities and tales of magic characters. Guarani myths and legends were never recorded, since the tribe had no writing skills. The earliest records of their tales come from the 16th century Jesuits.

The museum has all the creatures of Paraguayan mythology, which originated from the Guarani tribe, objects from the first Franciscan and Jesuit missionaries, and elements used during the Paraguayan war and the Chaco war.

Guarani had a very colorful folklore – their myth of creation revolves around Ñamandu, who created himself in a form of a plant amidst the foggy chaos (tatachino).  The roots of the plant formed the divine feet, the branches sprouted flowes and feathers, and the powerful shining of Ñamandu's  heart overpowered the great fog. Before populating the Earth, Ñamandu  created Ayvu – the foundation of the human speech.

The darker myths of Guarani feature various deities and monsters. One of the most illustrious creatures is El Pombero, or the man of the night - a  humanoid forest-dwelling creature, who stays awake at night and often sits on a mango tree and throws mangoes at those who doesn't treat the forest with respect. El Pombero can mess up your goods, steal eggs or honey, frighten your horses and cause all kinds of trouble. Some Guarani people still leave rum and cigars for him every night before going to bed.

There are also seven cursed brothers, the children of the evil spirit Tau and the beautiful Kerana, which were maintained in legends through generations:

Teju Jagua, the first son of Tau and Kerana, is a huge lizard with a shiny skin, seven dog heads and eyes that shoot out fire. He is the lord of the caves and protector of fruit and treasure.

Mbói Tu'i is the second son – an enormous serpent with a parrot head and a blood-colored forked tongue. He is the bringer of bad luck, the guardian of the swamps and amphibian life, who likes humidity and flowers.

Moñái, the third son – the lord of air - is yet another serpent with colorful antennae on his head. He steals products from villages, climbs trees and hunts birds, who he hypnotizes with his antennae.

The fourth one, Jasy Jatere,  or “a little piece of the moon”, is a small naked blond guy with a golden cane. He leaves the forest during the siesta and, with a whistling sound, lures the children that are not napping into the forest.  At the end of the siesta, Jasy Jatere gives them a magical kiss, which transports them back into their beds with no memory of the forest experience.

Kurupi, the fifth son,  is an ugly creature with an enormous penis wound several times around his waist, who is responsible for unexpected pregnancies and small, ugly and hairy newborns.

The sixth son, Ao Ao is a greedy sheep-like creature with massive fangs, who howls very loudly and eats humans. The only way to save yourself from Ao Ao is to climb a palm tree, which has an unknown power over the monster.

The last one, Luison is a werewolf-like creature and the lord of the night, whose name is associated with death – he lives in cemeteries and eats rotten flesh. If Luison passes through a person's legs, the person can turn into a werewolf. Because he was the seventh son of the evil spirits, and turned out to be a werewolf, Guarani try to baptize their seventh sons as soon as they are born.

Figures of these creatures, and of other deities are exhibited in the museum, keeping the Paraguayan indigenous legends alive. It took 20 years for  Ramón Elías to create this unique collection, which preserves the identity of Guarani. After his death in 1981, his wife continues working on the project.

Read more about Paraguay off the beaten path