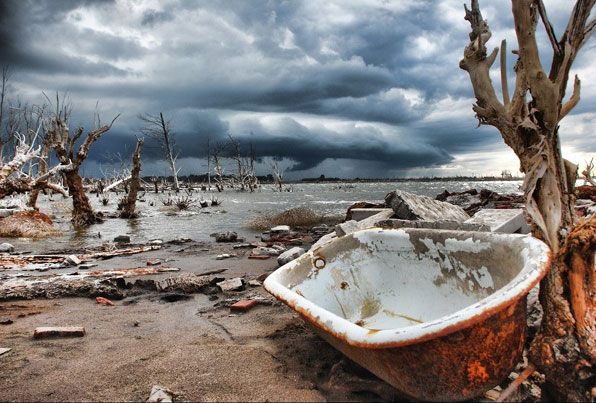 Nature giveth, nature taketh away. Villa Epecuen in Argentina may be one of the best examples of post-apocalyptic scenery.

Lago Epecuen, a salty mountain lake, used to be famous for its therapeutic powers. It was believed to cure rheumatism, depression, anemia and various skin diseases, and attracted thousands of tourists from all over South America and the world.

The name of the lake comes from a local legend about a great fire in the woods, after which the Levuche Indians, who lived in the area, found a child at the fire location. Epecuen means “almost burnt”. The miraculously saved orphan grew up to be a handsome, brave and strong young lad. After being victorious in one of his plentiful battles, he took hostage a daughter of the enemy chief, Tripantu. He loved the woman only for one moon and then moved on to the other pretty hostages. Tripantu’s heart was broken and she cried a lake, which drowned the cheating Epecuen and all his lovers with him.

1970s were very prosperous years for Villa Epecuen. However, once being a bustling resort town along the shore of the lake, it turned into abandoned ruins after the flood of 1985. A curious type of weather activity caused a standing wave, called a seiche, in the lake. The flood waters broke the dam, consumed the town and remained there for 25 years. By 1993 Villa Epecuen was submerged under more than 10 m of briny waters. Only in 2009, when the weather became drier, the waters retreated enough to uncover the town again, completely destroyed and uninhabitable.

Nowadays it is hard to make out which one of the concrete blocks used to be a part of hotel or shop. Dead trees stand in solitude, eroded staircases lead nowhere, the collapsed buildings with cracked paint are covered with layers of salt. Quite a horrifying vision, indeed.

According to its salinity levels, Lago Epecuen is the second after the Dead Sea and its salinity is ten times higher than any ocean. No wonder that the town was destroyed so quickly – thanks to the warm Argentinean climate, the chemical reaction and quantity of water unleashed onto the area. Just seeing the views of the present day Villa Epecuen in Argentina makes you realize why its former residents are reluctant to settle there again.

The partial recession of waters made Villa Epecuen become a new attraction for the curious travelers. Situated in Buenos Aires province, the eerie ghost town attracts more and more people. It is fascinating and moving at the same time. Although in a different way, but Villa Epecuen got another chance to return to its glory.