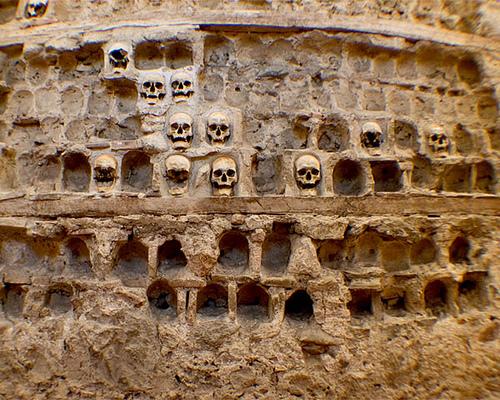 Since the ancient times, the way from Europe to the Middle East or Asia and Europe ran through the valley of the South Morava. By the place where the river Nishava flows into the South Morava, the road split in two directions - one went to the South, to Macedonia and Greece, and the other one to the East, to Bulgaria and Asia Minor. This is where Nis city was founded by Celts in the 3rd century BC. Nis is the birthplace of Constantine the Great and a place of several important events, as evidenced by numerous monuments in the city.

The most sinister of the monuments of Nis is Cele Kula  - the Skull Tower, which is located on the western outskirts of the city.

During the First Serbian Uprising, in the spring of 1809, about 12,000 insurgents, armed with 11 canons, moved from Deligrad to Nis. They set camp 10 kilometers from the city, near the village of Kamenica, preparing to attack. The battle was fierce. A few days later the Turkish army of 40,000 arrived to fight the uprising. The main strike of the  enemies was on the mountain Cegar, where the governor Stevan Sinđelić  had his army of 3,000. Being outnumbered and unable to resist, the governor blew up the powder warehouse and died together with his companions, causing heavy losses to the enemy.

By order of Nis' pasha, the bodies of the fallen Serbians were beheaded, skinned, the skin was stuffed with cotton and sent to Istanbul. The skulls were used to built Cele Kula, the fortress of skulls.  The skulls were immured into the outer walls of the tower, in the gaps between the bricks. There are 56 rows of bricks, each containing 17 skulls, making it 952 skulls in total. Cela Kula eventually decayed with time, most skulls fell apart, but those that remain serve as not just the evidence of the Nis pasha's cruelty, but also as formidable protest against war.