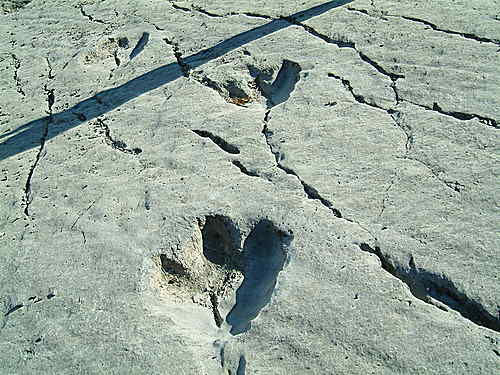 Dinosaur Plateau in Turkmenistan is probably one of the most confound places in the world, famous for its abundant evidence pointing to the presence of dinosaurs in those lands approximately 180 million years ago. The plateau is located in the south-east of Turkmenistan, in Kugitangtau (Koytendag) mountains, close to a tiny village of Khodjapil.

Local citizens noticed the mysterious dinosaur footprints in Turkmenistan long ago. Thus, there are several legends according to which ancient footprints were left by the military elephants of Alexander the Great and the name “Khodjapil” is translated as “sacred elephants” proves the surmise. Nonetheless, it was only in the second half of the 20th century when Soviet paleontologists found out about the place.

The Plateau represents a 400x300 m spot with almost 2500 paw prints of dinosaurs. Some of those trails remained untouched and stand out clearly against the limestone background. Although the plateaus with similar footprints have been found in China, the US, Tajikistan and Uzbekistan, none of them resemble the dinosaur tracks in Turkmenistan. The dimensions of these prints vary from 20 to 70 cm, and presumably belong to three species of dinosaurs of the Jurassic period - Megalosaurus, Iguanodon and Tyrannosaurus.

According to numerous studies, the present territory of the Plateau was formerly a marshland – the stamping ground of dinosaurs. Their deep footprints remained untouched under the marshy waters for a long time and retained their initial form. Afterwards the bottom of the marsh dried out and turned into limestone. Later, this limestone plateau rose and became tilted. After a few millions of years the rocks eroded by earth flows and water, and, now people can observe these miraculous prints of the past with their own eyes.

The discovery of Dinosaur Plateau was a real find, which was followed by another, no less mysterious, sensation. Alongside the huge dinosaur tracks, 6 human tracks and several hoof prints were found, belonging to the same age. The scientists are still uncertain of the origins of any of these prints.

In November 2013, members of National Geographic Society of the USA arrived in Turkmenistan. The researchers and camera crew filmed a movie about historical and natural sights of Turkmenistan including the Dinosaur Plateau. Thus, in a short time a great many of people around the world will learn about all the mysteries and secrets of this faraway Central Asian country.

Read more about Turkmenistan off the beaten path

Find more off the beaten path near: Ashgabat Geok-Tepe Koytendag