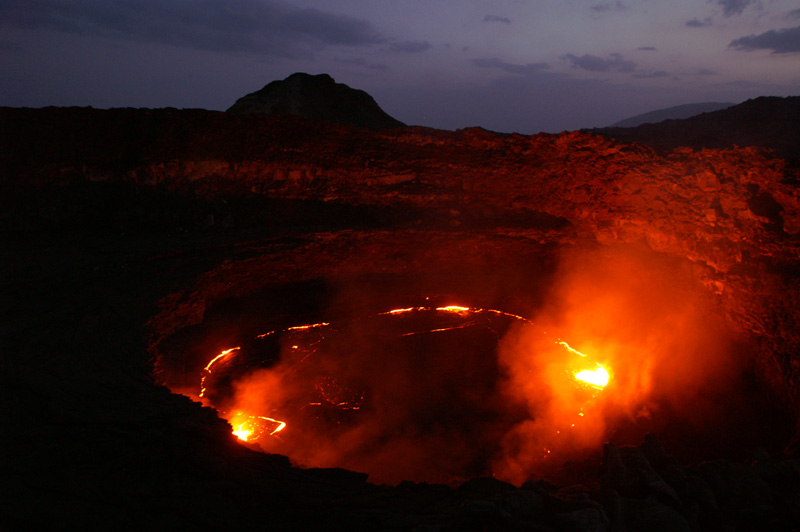 Erta Ale is an active molten lava ejecting volcano, located in the Danakil Depression (or Afar Depression) in the Afar Region of northeastern Ethiopia. Known as the “Smoking Mountain” or “The Gate to Hell”, the volcano puffs clouds of smoke on a regular basis.

Afar tectonic depression is a piece of land, melted by magma, situated between three tectonic plates. Danakil Desert, where the volcano is located, is the driest, hottest and most inhospitable desert on the planet not only because of its nature and climate – it was also not easy to cross the desert because of Afar tribes' cruel practices of castrating the travelers.

Erta Ale is the most inaccessible volcano on the planet, and the only one that has two lava lakes. A lava lake is a huge accumulation of magma, which is gradually mixed with its movement. The currents of magma constantly rise from the depths of the earth to the surface of the lake, cool down, and sinks to the bottom of the lake – this process is called convective exchange. The tectonic pattern on the surface of Erta Ale's lava lake  is constantly changing - you can see the old frozen areas of magma, forming a thin crust, and very fresh, easily degradable pieces. This process is accompanied by chaotic bursts of bright red molten lava and emissions of accumulated gas. Sometimes the underground magma currents' pressure is so strong, the lake literally explodes, spewing fiery lava to a height of 40 meters.

By its magma's chemical composition Erta Ale is compared to deep sea volcanoes – their magma has low silica content. Erta Ale used to be under the sea as well, and it took 3-4 million years for it to reach the current size.

The first evidence of the emergence of the lave lake in Erta Ale dates back to 1890. No one actually went up to the lake, however it was possible to detect the lake thanks to the red glow on top of the volcano. The first explorers came to the lake in 1960 and documented the lake of fire. Approximately every 30 years the volcano shows its true power, making all the living beings run for their lives. In the recent years, Era Ale became even more unpredictable  - in 2004, the lava lake cooled down and became hard surface for 20 months, and in 2010 the volcano awoke with a tremendous force. Its eruption was accompanied by tremors, which significantly affected the state of the tectonic plates in the Northeastern Africa.  Scientists are closely watching the volcano's activity, as it is a very important seismic zone, referred to as “The Afar Triangle”.

Not many tourists dare go up to the edge of the crater – there are no barriers or restrictions to approach, you just have to use common sense. However scary this site is, the view of the fiery lake is mesmerizing – lava spills, freezes, cracks, sinks down to the bottom of the lake, accompanied by the eery glow, jets of steam and cacophonous noise.

Read more about Ethiopia off the beaten path