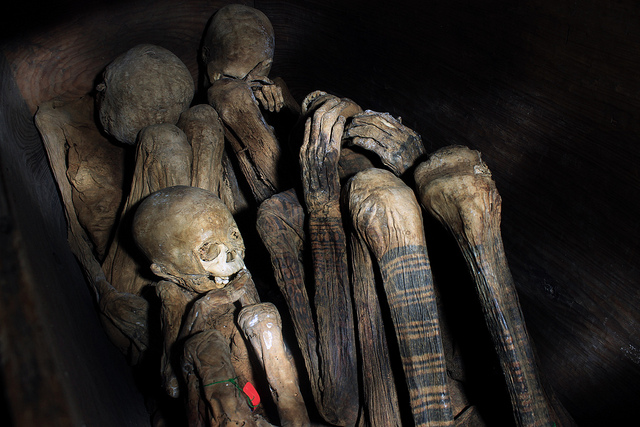 The strange Kabayan mummies can be found in Timbak caves, which are not that easy to reach – it takes a five hour car ride up the mountains and then another five hour hike. Timbak caves contain the bodies of Ibaloi tribe leaders, which are mummified in a special way. It is prohibited to visit the cave without an Ibaloi guide, otherwise the mummies might unleash their fury at the intruder.

The mummies, dated between 1200-1500 AD, lay in the original coffins, which are quite small – Ibaloi peope buried their dead in the fetal position, with their knees pressed to their chest. The Ibaloi mummification recipe was quite unique – while a person was still alive, but knew that his death is near, he had to observe a certain diet to cleanse the body. Before his last breath, he was given a strong saline solution to drink. When the person was dead, he would be put into the fetal position and placed on a chair over a fire to relieve the body from the fluids and to make it dry up completely. To dry the insides of the body, tobacco smoke was blown into the mouth.  The fluids would be collected into special vessels, for it was considered sacred. After that, herbs were rubbed all over the body, removing the top layer of the skin, and the body was left outside to dry in the sun. The whole mummification process took about six month. When the body was completely sun-dried, it was placed into the coffin and moved into one of the caves.

Ibaloi locals still believe that the leaders, whose mummified bodies lie in the caves for several hundred years, still watch over their people.

The place has little security and is considered one of the most endangered sites in the world. There are many more mummies in the caves, however, the officials will not give out their locations in fear of vandalism.

Read more about Philippines off the beaten path