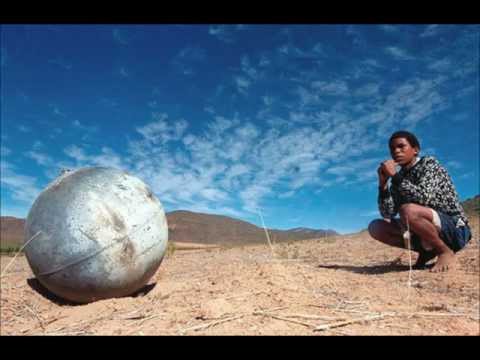 Remember the movie The Gods Must Be Crazy, when a bottle of cola, fell from an airplane down to a village of pygmies – the mysterious object, which changed their lives? After three decades in the African savannah the story repeated, but the object that fell from the sky was a strange ball.

In 2011, in a deserted place in the north of Namibia, 750 kilometers from the capital - Windhoek, they found a metal ball, 35 cm in diameter and weighing 6 kilos. Five days before the incident, residents heard a series of small explosions, somewhere within five kilometers of their settlement, around the location where the mysterious object was found.

The AFP scientific police representative, Pablo Luedicke, informed the press that the ball was empty inside, consisted of two hemispheres welded together and made of an alloy that could be created by man, or humanoids. Studies showed that the object was safe, but its nature was unknown.

Namibian authorities were quick to contact NASA and the European Space Agency, to find out if it was debris from space, since the fall of the object created a crater of 3.8 meters in diameter and 33 cm deep.

Adrian Chen of Gawker, identified the ball as a fuel tank of one of Astrium unmanned rockets, which launch satellites into orbit, and that it was most likely a 39-litre hydrazine bladder tank.

These incidents have ocurred many times in various places on earth – similar balls were found in Southern Africa, Australia and Latin America for the last 20 years. They were not exactly "gifts of the gods” for the ones who found them – the growing space junk problem is becoming an increasing danger to space missions and to the ones whose head it might fall onto.

Read more about Namibia off the beaten path

Find more off the beaten path near: Solitaire Windhoek