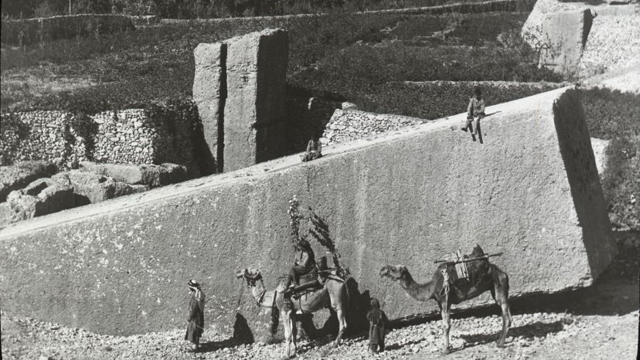 Baalbek is a group of temples built in Lebanon, located  85 kilometers northeast of Beirut at the foot of the Anti-Lebanon mountains. What makes this place unique is that at the base of the temple of Jupiter  there were found megaliths of colossal dimensions, weighing 800 tons. Moreover, in the nearby quarries of this complex there is the world's largest hewn stone - the"Southern Rock" or the “Stone of the pregnant woman”, whose weight exceeds 1000 tons.

No one knows who created the foundation of the temple and when – there is no sufficient evidence to clarify these questions. Baalbek has an almost mystical story connected to it – when it was rediscovered by the archaeologists, many thought that it was created by extraterrestrial civilizations, who used to visit the ancient solar system. It was hard to believe in something that the huge chunks of Baalbeck terrace were the result of human labor without any high-tech machinery.

Baalbeck miracle stands in a place where back in 1000 BC there was sanctuary to the Phoenician god Baal. With the arrival of Alexander the Great to the Middle East, the Greeks considered Baal similar to their sun god Helios. Since then, the city's name was changed to Heliopolis. With the annexation of the city to the Roman Empire, Heliopolis was the settlement place of veteran legionnaires and became the center of Roman power in the Bekaa Valley. The construction of a grand temple of Jupiter began almost immediately after the arrival of the Romans.  Roman authorities chose the best architects and the most experienced builders for the construction of an unprecedented sanctuary in honor of Jupiter, Bacchus, Venus and Mercury.

The origin of this Temple of Jupiter trilithon causes a big dispute among scholars, because the weight of each almost a thousand ton. Besides that, there is a fourth stone in the temple – the “Stone of the Pregnant Woman”, the largest of them all and the largest stone ever hewn by man. It weighs about 1200 tons, equivalent to three Boeing 747s. This one proved to be impossible to move, and it was left where it was cut, without being used in the construction.

The coming of Christianity brought decline to Heliopolis. The city continued to live, but the new priests rebuilt it to appease the new gods -  first into a cathedral, then into a mosque, culminating in a strong earthquake destroying the complex. During the rule of Emperor Justinian, a part of the giant granite columns of the temple of Jupiter was taken to Constantinople and installed in the church of St. Sophia. In the VII century. Heliopolis was captured by the Arabs, who returned the city its original Semitic name, Baalbek, and rebuilt the temple complex into a fortress. This giant structure withstood the assaults of the Seljuks, the siege of Crusaders and the devastating invasion of the Mongols. With the arrival of the Ottomans, Baalbek was already a remote province.

In 1751 it was rediscovered by the British architects. Unfortunately, earthquakes continued to cause significant damage to the buildings. During the French mandate archaeological work was carried out mainly by the French, and after gaining independence, the Lebanese Department of Antiquities took care of the monument.

According to an Arab tradition, Baalbek belonged to the mythical Nimrod, who once dominated this part of Lebanon. In an Arabic manuscript, discovered in the area, it says that Nimrod sent giants to rebuilt Baalbek after the Flood. Sometimes the construction of Baalbek is associated with the biblical character Cain, son of Adam. Allegedly, Cain built Baalbek as a shelter, when Yahweh cursed him.

The Tree of Knowledge in El Qurna