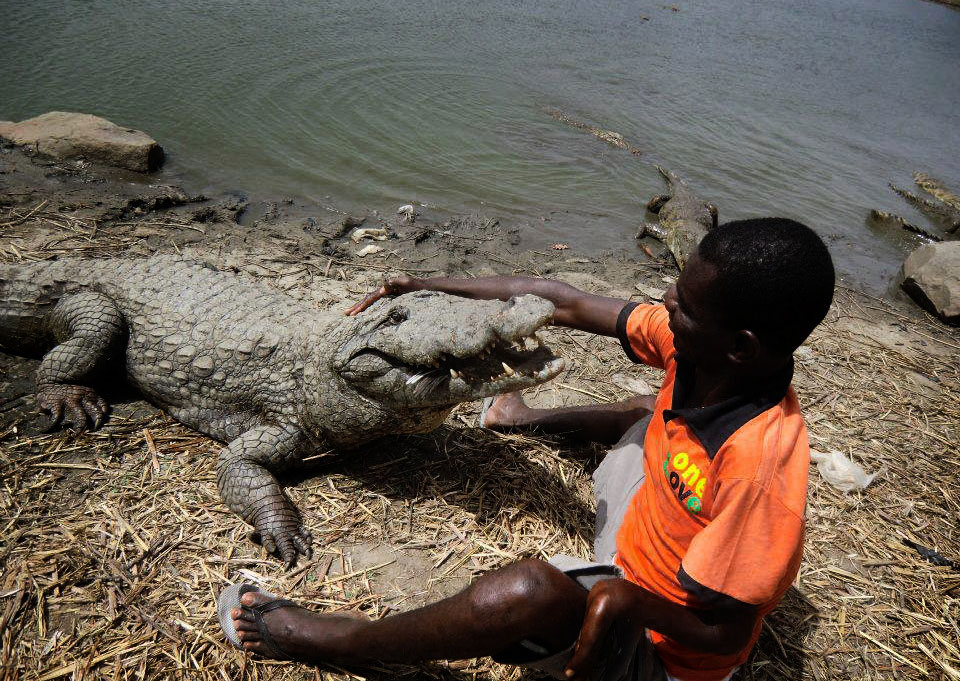 ​The small village of Paga, in Ghana, truly challenges the laws of nature. Here, crocodiles and people live side by side, without causing harm to each other.

According to a local legend, one of the ancient crocodiles of this pond saved the life of the first man who settled in Paga, by leading him to the pond to quench his thirst from a long journey.

The locals bathe in the pond in a relaxed manner, and don't seem to mind a 100 crocodiles around them.  The oldest crocodiles in the pond are over 80 years old. So far, none of the villagers had a problem with the reptiles.

In Paga it is assumed that every resident of the village is emotionally connected with one of the crocodiles, that the crocodiles hold the souls of their deceased relatives, and the death of the most prominent local residents often coincides with the death of one of the reptiles. It is strange indeed, that crocodiles themselves have established strong relationships with people and never caused them any harm. Local fishermen go knee-deep in the water right next to the huge crocodiles and always come back unharmed. People wash their clothes right next to a bunch of reptiles, and children have lots of fun in the water side by side with the crocs.

This incredible relationship between humans and reptiles baffled scientists for many years. Paga has become one of the popular tourist attractions. This is, perhaps, the only place in the world where you can be photographed sitting on a huge crocodile and have a natural smile on your face.

The waters populated by these huge reptiles have an abundance of fish and frogs, which makes crocodiles full all the time, so they don't look at the people as if it they were steak. Also, before they can entertain tourists, the locals make sure to offer some chicken to the crocs – you know, just in case..

Gallery: The domesticated crocodiles of Paga