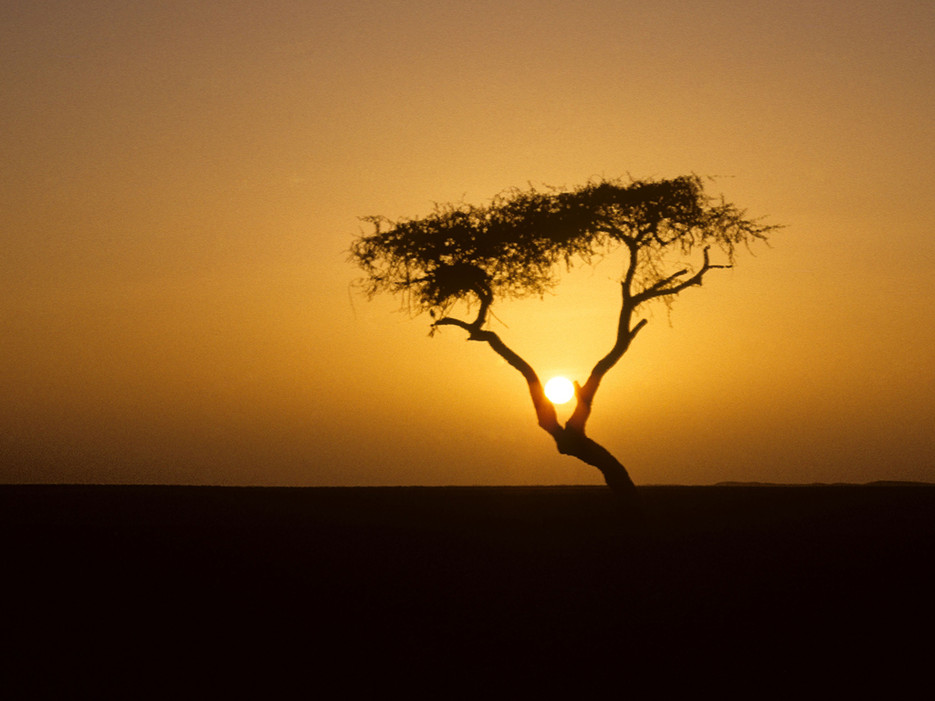 In Niger there is a mausoleum for the loneliest acacia tree, called Tafagag in Tamasheq language, which has a very sad story behind it. The tree grew 238 kilometers from the city of Agadez on the road to Bilma, and was known to all Tuareg caravan travelers, serving as one of the natural landmarks in Ténéré desert. There was no other tree around it in the radius of 400 km, and it was unclear where the tree came from.

Scientists started investigating this mysterious tree in the late 1930s.  Tafagag was probably the only tree in the world, which was put on a map. The research, however, did not provide any answers about the origins of the tree. But of course, there are legends about it. Here is one of them:

Eons and eons ago, there was a boundless sea in the place of the desert, with sprawling groves on its shores and a tribe inhabiting the area. The tribe  had fishermen, hunters, and cattle herders, who worshiped the god of thunder, lightning and storms. However, one young villager did not want to worship the thunder god and bring him offerings. Instead, he served the goddess of love and fertility. This made the god of thunder furious - he dried up the boundless sea, turning it into a desert, and transformed the young man into a tree. A couple of centuries later, the god asked the tree : “Well, will you serve me now?” And the tree said: “No”. In response to that, he stroke the tree with lightning, but the tree kept standing and growing. Although the tree got burned on the outside, it was alive inside, thanks to the brave heart of the young man, who was not afraid of thunder. Because of that, all the caravans passing by took the time to stop and give praise to the tree.

The tree was, therefore, not only a guide for the caravan men, it was also a symbol of hope. They would exclaim “Tafagag!” every time they saw it, which evoked the same joy in the desert travelers as the words “Land!” for seafarers who deviated from their course.

Legends or not, the existence of this acacia tree provided proof that at some point there was life in Ténéré. According to archaeologists, there was, indeed, a lake with trees on its shores, local tribes cultivated various crops, and wild animals were roaming around, ca. 600 thousands of years ago. The excavations revealed polished stones, axes, arrowheads, mortars, grinders and pots, along with some drawings of hunting scenes.

The beloved tree of the caravan travelers met its tragic end not by the hand of the god of thunder, but by the idiocy of a local drunk driver. On a fateful day in 1973, a Libyan truck driver decided that he wouldn't harm anyone during a long boring drive through the desert if he had a couple of drinks. Unfortunately, he slammed directrly into the lonely tree and decapitated it from its roots.

The tree was transported to the Niger National museum in the capital, and four years later, a mausoleum was created in memory of the tree. Nowadays, there is a tree sculpture made out of metal, standing in the same place where Tafagag used to grow, still serving its purpose as a landmark.

Gallery: The mausoleum for the loneliest tree of Ténéré

Read more about Niger off the beaten path