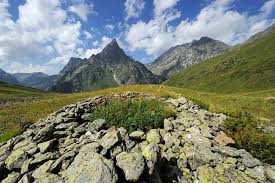 Many mountains in Abkhazia are interspersed with strange rectangular or circular stone structures, called “atsangvaras” – “dwarf fences” in Abkhazian. Atsangvaras were discovered in 1893 by Nikolai Albov, a botanist researching western Caucasus. Until then, these ancient structures have not been described in literature. Atsangvaras are often deteriorated, which makes them hard to notice. However, because of their layout, these structures cannot be mistaken for anything else but a creation of man. They look like stone fences built for cattle keeping.

The reason these structures are called dwarf fences is the Abkhazian legend. According to this legend, the first inhabitants of the mountainous Abkhazia were dwarves, the Atsan. Back in those days, the summer was never-ending, illnesses did not exist, and the Atsan were immortal. These primeval dwarves were small, chunky and big-boned, but exceptionally strong, and skilled in climbing up ferns to cut down their leaves. They rode rabbits and wore no clothing whatsoever, which made them stealthy enough to creep up on an unsuspecting deer and secretly milk it. The dwarfs knew nothing of fire and consumed raw meat, milk and spring water. They also cultivated bread, and owned goat and sheep, which they kept within stone enclosures – the atsangvaras.

Although the dwarves had a seemingly ideal life, there was one issue. They happened to be related to god, and any family has its feuds. Their involvement in heavenly business started when a giant golden box with a baby inside fell down from the sky on the unsuspecting dwarves during their lunchtime in the meadow. Naturally, there was no choice for the Atsan other than to keep it and raise the boy. This boy turned out to be god’s nephew. When he grew up, he went back into heaven, leaving the dwarves feeling accomplished, incredibly proud, and confident about themselves. Anyone who raised god’s nephew would feel saintly, untouchable and proud of his good deeds. Eventually, this pride lead to an escalation of debauchery, blasphemy, water contamination and ungodly behavior among the Atsan. In response to this uncomely behavior, god got angry and plotted a revenge.

One morning, the 300-year old dwarven elder was resting in the shade of his goat’s beard. Suddenly, he noticed, that the goat’s beard started quivering in a very unusual way, when usually it would never quiver and be quite steady. The beard quivering was caused by the wind that god decided to send onto Earth for the first time. The elder dwarf immediately realized that the end was nigh. The wind brought black clouds that covered the sun, and, suddenly, it started raining with cotton! With one stroke of lightning, all the cotton caught on fire and most of the dwarves got incinerated. Some dwarves hid in the water and between the stones, but they were turned into frogs, demons and snakes. This is how the reign of Atsans ended, and all that’s reminding us of them are the atsangvaras – the dwarven stone fences.

Legends aside, atsangvaras have not yet been explored enough. The archeologists can’t really tell whether the cattle held within these stone structures was goat or sheep, however, the accepted hypothesis is that goats would have been able to escape from such low enclosure, and sheep would not. The height of an average atsangvara is 0.5 – 1 meters. During archaeological investigations of the structures, there were interesting findings proving the existence of a well-developed shepherding culture dated ca. 6-10 AD: multiple pottery pieces, bones of sheep and goats, arrowheads, sacrificial vessels, coins, crosses, and jewelry. In 11-12 AD, atsangvaras were no longer used for either a socio-economic reason or due to a climate change. In 11-15 AD, the atsangvaras served as places of prayer and sacrifice to the mountain spirits. According to archaeological research in 1975, different arrowheads found at the sites indicate that the inhabitants hunted for birds, animals, and river trout; the metal crosses had sharpened bottom edges for sticking the cross on a wooden pole and marking holy areas; and goat sacrifice was a popular activity. These findings also show how mixed pagan and Christian beliefs were in the late middle age period in Caucasus. An 18-century traveler, Jakob Reineggs, wrote, that on the first days of May, the Abkhazians would gather in dark forests to honor the trees and the spirits by prayer and sacrifice, while carrying wooden and iron crosses. Exchanging crosses with each other was a token of friendship.

Previously unknown atsangvaras keep being discovered. Most of them are situated close to rivers, mountain passes, and forests, since these are the best places for building materials. Some of the known constructions can be reached from Aibgha village on the Psou river by following the forester roads towards the Akhag mountain range and up to the river Besh. The most impressive “dwarf city” ruins can be found close to the Avadhara resort by going 6 kilometers through the forest towards one of the most beautiful mountain lakes of Abkhazia – Mzi. Over 10 stone dwellings with narrow entrances and archaeological findings are spread over the area of 2 square kilometers. Another cluster of atsangvaras is situated on the Rikhva mountain range, which can be accessed via Ritsa-Avadhara road. A lot of atsangvaras with sacrificial remains can also be found on the Bzyb range in the area of the Silver mountain. It is believed that there are many more atsangvaras to be found.

Those who decide to visit the remains of the Abkhazian dwarf kingdom, or perhaps to search for undiscovered atsangvaras, will also get to discover all of the natural gifts and gorgeous landscapes of Abkhazia, the vast forests, surreal mountain ranges and a remarkable local culture with interesting folk tales.